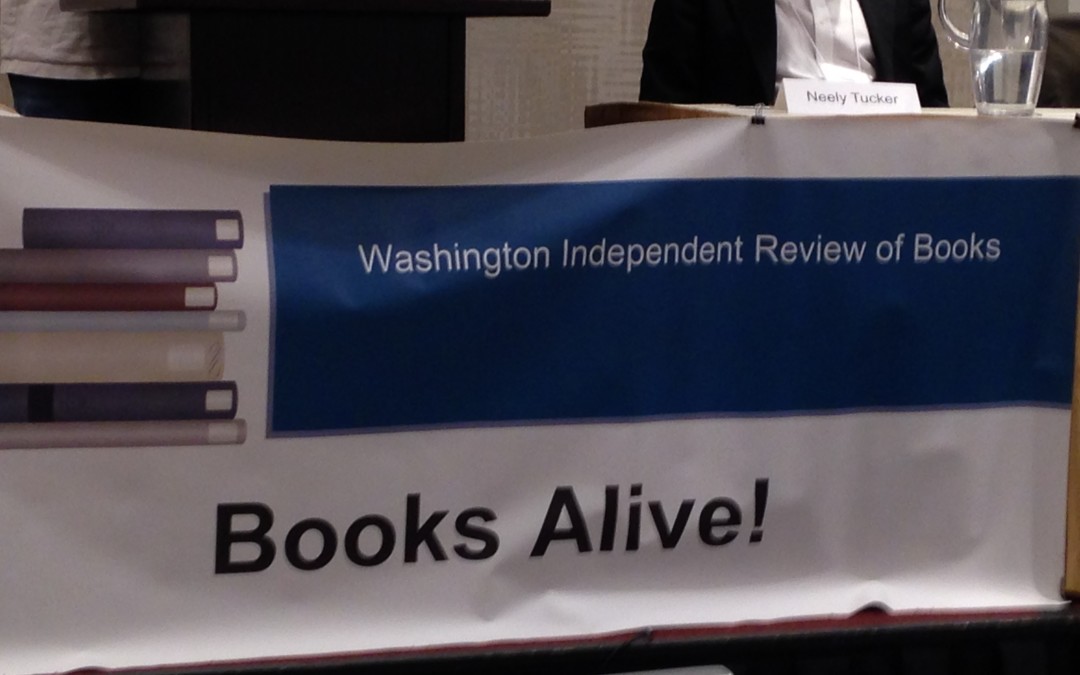 This weekend, I had the most awesome time at the Books Alive writers’ conference. It reminded me once again why I want to be a writer.

I arrived at the Bethesda Marriott in plenty of time to catch the panel on self-publishing and ebooks. Among the panelists were one author who self-published exclusively with Amazon and the head adult book buyer for the esteemed local indie bookstore, Politics and Prose.

The author who published exclusively with Amazon never really articulated why he did. Maybe he thought it went without saying. He did mention something about Amazon’s amazing marketing team and (possibly) that their editorial staff was great. The book buyer with Politics and Prose took pains to remark that his store would never, ever, ever stock an Amazon-published book, nor would most other indie bookstores he knew about. At which point, I stood and cheered, lustily simply nodded in mute acknowledgment.

For what it was worth, the Amazon-only author did note that the company could be slightly Big Brother-ish in various ways. He said that authors were becoming concerned about Amazon for various reasons. My response was to stand up and shout, “I’ve been freaking concerned about Amazon for the last four years! Did anyone care? Hell, I even compared Amazon to … never mind!” sit quietly, rolling my eyes.

There was also a great deal of talk about the process of self-publishing, which quite clearly many people still don’t understand. Apparently, a shitload of “self-publishing companies” have sprung up, selling a variety of services along with aiding authors in the publishing process.

Oddly, no one spoke about the value of using a service such CreateSpace vs. forming one’s own imprint and releasing print copies through Ingram Spark or Lightning Source (an Ingram company). I must confess I wondered what the … I was bewildered.

Nonetheless, the conference was well worth the effort of attending. For one thing, I got to hear Kitty Kelley (famous for her unauthorized biographies) and Bob Woodward (famous for all sorts of things, including being part of the team that broke the Watergate scandal in the early 1970s) give speeches that weren’t at all boring! In fact, they were inspirational.

It was after these talks that I had my most weird meta-moment. Not only was I able to snap this candid photo of Bob Woodward walking away from the podium. But I was also able to show him the photo of me showing a copy of my old student newspaper The Citizen Call, where I served as both reporter and editor, to his old reporting partner, Carl Bernstein. And someone took a photo of that! Debbi Mack shows Bob Woodward photo of her showing Carl Bernstein her old student newspaper, on which she worked.

And now I’m blogging about it. Mind officially blown!

Of course, I had to get a photo of the two of us together, because this was historic! For me, anyway! 🙂 I’d be remiss if I didn’t mention seeing Mark Olshaker (who I’ve known for years – way back to my days as a legal practitioner) interviewing the former Washington Post film reviewer (and Pulitzer Prize winner) Stephen Hunter. And here they are, smiling for the camera! Not only that, but I appeared on a panel, billed as a screenwriter for the first time. My panel mates included, not only an entertainment attorney and agent (literary with a special interest in film/TV adaptation), but Jim Grady, the author of the book that inspired this totally awesome movie!

After the signing (and I did actually sign a book – a copy of INVISIBLE ME), Jim and I had a photo taken together. I also bought my own copy of SIX DAYS OF THE CONDOR, which Jim graciously signed for me!

And here are my books displayed right near Jim’s on the Upshur Street Books table! I have to say, this event was well worth the time. I sat in on a session about memoir where two authors, including Donna Britt (memoirist and award-winning former syndicated columnist) talked about the process of writing about one’s life. Donna’s words in particular stuck with me. Without going into all the detail, I became convinced right then and there that I should attempt to write my memoirs.

Mind you, I have no idea if I’ll ever publish them, but I do intend to try.

Finally, I will only add for those who may not be as familiar with self-publishing as I, did you know that a 27-year-old has attracted the publishing world’s attention by telling stories through celebrity/fan-fic Instagram memes? Not to mention that 9-year-olds can self-publish now? Made me wonder if some people who won’t be named had even heard of the Internet, you know? 🙂