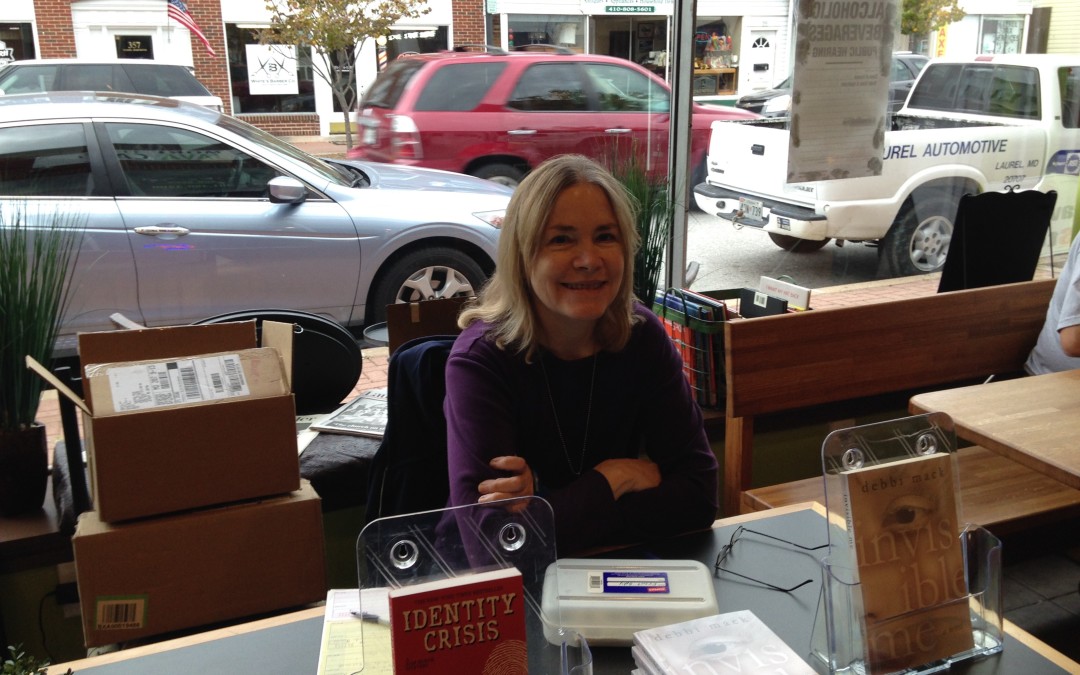 This photo of me at Saturday’s book signing event at More Than Java Cafe may not be the best ever, but I had the most awesome signing there last Saturday!

First, let me set the stage a bit. Here’s a photo of the inside of More Than Java Cafe! And here are a few of the readers I met! See the guy sitting across from me? Well, he was Harvey, a screenplay writer who’s going to Austin Film Festival for the first time!

So, I told him all about how awesome the film festival was. And how I met the amazing Frank Darabont and Chris Carter, and how I walked with Frank Darabont down the street to where he was going to get an award. And how we talked about awesome films like The Big Sleep and L.A. Confidential while we walked. Okay, at the table next to me, there was this really awesome family. Their names are Reinhardt (I think) (sp?), Anna (not sure if that was with one “n” or two!), and Irene, who’s eight years old, I think. My memory is shot! :-O

Anyway (crutch word!), mom wasn’t sure if INVISIBLE ME would appeal to a child her daughter’s age. And I thought, well … maybe. So I asked Irene if she liked boys. And she made this really cute, scrunched up face. Like, “Ewww, boys!” 🙁

So I said, “Maybe someday, you’ll feel differently.” 🙂 And she ended up with a copy of the book. And I’m thrilled to say that Irene was either so bored she read the book or that she devoured it while I spoke with her parents! I sure hope it was the latter! 🙂

Okay … so here are the books … which I actually sold! INVISIBLE ME, the YA novel. Oh, and here’s the Robert Crais novel that I was going to read, if I got bored. But I didn’t and it was awesome! And I told Harvey all about meeting Robert Crais at Bouchercon ages ago. And what a great guy he is. And how I’ll never forget meeting him as long as I live.

Then I told him the story about Joe Pike versus Jack Reacher, which is really Crais’ story to tell. But it bears repeating.

When someone asked Robert Crais who would win a fight between Jack Reacher and Joe Pike, Crais said (without hesitation), “Joe Pike would make Jack Reacher his bitch!”

So … apologies to the awesome Lee Child, who is really a great guy, too. But, honestly, that made me double over laughing!

Finally, here’s a video about Sam McRae’s neighborhood, which includes footage of More Than Java Cafe!