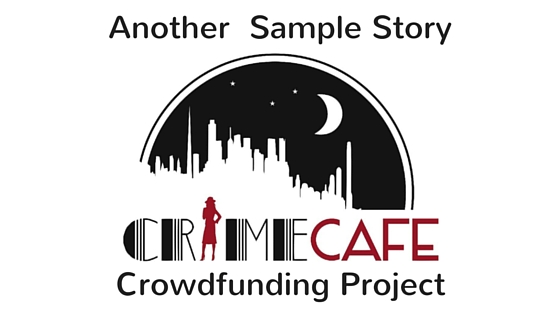 Hello! Once again it’s Friday and almost time to party! On Facebook, of course! If you click that link, it’ll take you to Party Central for the Crime Cafe Stories Project, scheduled for tomorrow from 2:00 to 4:00 p.m. … believe me, if you’re an early supporter (click there for details) and you enjoy crime fiction, get in on this now! 🙂

In any case, I have another sample chapter from one of the boxed set’s contributors. This one is the first chapter of No Game for a Dame by M. Ruth Myers! The guy with the bad toupee strolled into my office without bothering to knock.  His mustard colored suit set off a barstool gut and a smirk that told his opinion of private eyes who wore skirts.

“You’re bothering a friend of mine.”

My legs were crossed on my desk.  I have great gams.  Sometimes I don’t mind displaying the merchandise, but Mr. Hair wasn’t my cup of tea so I sat up.  I blew some filings off my pinkie onto the afternoon edition of the Dayton Daily News where a column predicted the French and the Brits would likely let Hitler have the Sudetenland.  The wrong step to take with a bully, I thought, but no one had asked me.  I made a couple more swipes with the emery board before I acknowledged my visitor.

“Lose the stogie if you want me to listen.”

I saw his jaw tighten.  He didn’t like being told what to do.  He looked around, saw the ashtray on the file cabinet by the door, and stubbed out his smoke.  A top-of-the-line Havana by its smell, so the guy had money.  Or knew people who did.

“Elwood Beale.”  He stood with his legs spraddled trying to look tough.  Maybe he was tough.  “Says you’ve been sniffing around asking questions.  Mr. Beale don’t like that.  Him being a businessman with a reputation to consider and all.  Could give people the wrong idea.”

“I thought businessmen liked to advertise.”

The eyelids of the man in front of me lowered to half staff.  “People who stick their noses in things get them busted.  Even broads.  Woody thought maybe you didn’t know that.”  Leaning over he planted his hands on my desk and gave a grin as phoney as Houdini’s chains.  “Woody treats girls right.  Furs.  Favors.  Might take a fancy to a cute little brunette like you, smart mouth and all.”

I picked the emery up and started on my nails again.  “Anything else?”

I knew one of his hands would move, and it did, smashing the emery onto the desktop.

“Who hired you to snoop?”

“Maybe you came in so fast you missed the ‘private’ part of Private Investigations.”

He lunged for my wrist but I was too fast.  I stood up, balancing on my toes.  I wasn’t particularly scared.  It was barely four o’clock and there were a couple of other offices down the hall from me if things turned nasty.  All the same, Mr. Hair looked like the kind who might use his fists if he couldn’t bully you, and I liked my nose fine the way it was.  He stood maybe five-eight so he had me by five inches and about seventy pounds, but a punch to the gut with all my weight behind it would probably topple him.

He yanked my phone from the desk and ripped the line out of the wall, cutting off that help.

“Smart girl, huh?” he said heaving it at a lamp and missing.  The phone cradle hit the wall.  The receiver bounced off a table and hit my umbrella stand.  “WHO IS IT?”

Presumably he was asking about my client.  He dodged around my desk.  I dodged the other way.  I grabbed the umbrella stand and swung, clipping him in the chin.  He staggered back against the file cabinet. With a sloppy jig step he just managed to stay upright against it.

“Beat it!”  I feinted with the umbrella stand.  “I don’t give out names of the people who hire me.   Come around here again and you’ll be sorry!”

I was counting on my raised voice to make him decide against staying.  After several seconds it worked.  He heaved himself straight, gave me a murderous look, and stabbed a finger at me.  “You’re gonna find out snooping ain’t no game for a dame.”  As a parting shot he swept the dime store ashtray holding his squashed stogie off the cabinet.  He watched it shatter.  Then he turned and left.

His toupee had slipped.

For several minutes I sat on my desk surveying the mess and waiting for someone from one of the other offices to come check on the commotion.  No one did.

Since no one else seemed inclined to commiserate with me, I decided to let a gin and tonic do it.  The necessities were in the bottom drawer next to my handbag.  I sat on the desk again sipping consolation and looking morosely at chunks of glass scattered everywhere, a broken phone, and dirt from a long dead plant that had gotten upended somewhere in the scuffle.  I hated to clean.  It was why I lived in Velma Zieman’s rooming house instead of an apartment.  The other reason being I couldn’t afford both an office and an apartment if I also wanted to eat.  I wondered how much it was going to cost me to fix the phone.

Mostly, though, I wondered why the case I was currently working had earned me this kind of visit.  I finished my drink and swung my legs a few times and thought about it.  Three weeks ago Lewis Throckmorton, owner of a company that sold business forms and office supplies, had hired me to check on his nephew who worked for the company and, as Throckmorton put it, had been “acting odd”.  The nephew, Peter Stowe, had too many new clothes lately, his uncle thought.  He’d become distracted at work.  Furtive, too, slipping out early a couple of times without telling anyone where he was going.  Not that his absences were the problem.  Peter had always worked many more hours than his paycheck merited.  He was a good worker, understood the company bottom to top.  Maybe it was nothing.

It didn’t take a detective to figure out Throckmorton thought his nephew might be dipping into the till.  Nor was it the first time a business had hired me to investigate one of their own.  Naturally Throckmorton didn’t want his nephew to know about his suspicions.  That meant my end was to check what the nephew did after he left work.

In three weeks of surveillance, what I’d unearthed would fit in a thimble.  He’d visited an engineering firm.  He’d made a couple of trips down to the university.  A couple of times he’d met a girl but I didn’t know who she was.  Then two days ago after work, as he was legging it uptown, a dark green Packard had pulled up beside him.  Two men swung out, one from the front seat and one from the back.  By the looks of it they didn’t engage him in very friendly conversation.  As soon as they pulled away, Peter Stowe dabbed his forehead with a handkerchief and turned and made straight for home.  He’d looked over his shoulder a couple of times.

I knew a kid who sold newspapers a couple streets over and might have seen the Packard before, or could keep his eye out.

“Easy money, sis,” he said snatching the quarter I offered.  “Car belongs to Elwood Beale.  Goes to Ollie the barber and gets the works a couple-a times a week.  Has business over this way ‘most every day.’”

So I’d talked to Ollie, asked about Peter Stowe.  I’d played a hunch and mentioned Beale at the tailor where Peter Stowe had gotten his snappy new suit.  For my money that wasn’t enough to merit sending a goon to sweet-talk me.  Not unless Stowe was mixed up in a lot more than his uncle suspected.  Or unless the uncle was dodgy as a revivalist’s offering plate and had lied about why he wanted my services.

I reckoned it might be smart to let what I knew and didn’t know simmer.  That left me with not much to do except get rid of the worst of the mess left by my caller.  I got most of the glass from the ashtray and some of the dirt from the upended plant.  I put the phone back on my desk with what was left of the cord wrapped around it.  That would have to do until the Negro girls who cleaned all the offices came in tonight.

The warning from Mr. Hair had made me cautious.  I locked up fifteen minutes early.  Downstairs I slipped a note through the management’s mail slot telling them an irate client had ripped out my phone.  They’d probably think I’d told some guy his wife was cheating, imagine risqué details and maybe see about fixing the phone sometime this century.

I continued a few steps past the management office and slipped into the janitor’s closet. Behind mops and buckets and ladders there was an old exit that nobody used but me.  Since our building sat near a point where two streets angled together, the main lobby door and the one for deliveries both opened on Patterson.  The one in the closet, if you opened it all the way, smacked the side of the neighboring building, which probably hadn’t been there initially.  The narrow gap between the structures went on to the alley, where an electric pole and couple of trash bins hid it from view.

I squeezed along sideways.  The alley beyond was deserted.  When I reached the street I made a couple of zig-zags to make sure Mr. Hair wasn’t following, and headed for the two storey white rooming house where I hang my powderpuff.

So don’t forget. Please come to the Crime Cafe Stories Project Facebook Party tomorrow! Sign up as an early supporter! There’s a nice little incentive you’ll get if you do! 🙂

Oh, and BTW, here’s all the things I wish I knew before I started a YouTube channel!