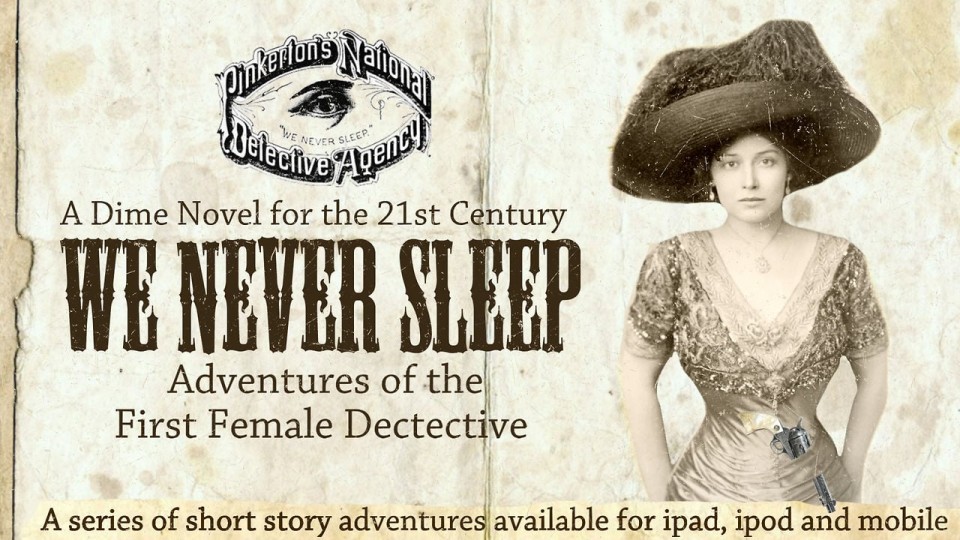 While hard-boiled female detectives may seem to be a recent development (at least in fiction), they really aren’t in reality. In fact, the first female detective in the United States was Kate Warne, who worked at the Pinkerton Detective Agency in the 1800s (the agency that inspired Dashiell Hammett’s work).

Born in Erin, New York, Warne answered a Pinkerton agency want ad for a detective in its Chicago office, as a widow seeking work at the age of 23. Pinkerton assumed she’d come seeking a clerical position and, when disabused of that notion, he advised Warne, “It is not the custom to employ women detectives!”

Warne argued that women could be “most useful in worming out secrets in many places which would be impossible for a male detective.” Women could befriend the wives and girlfriends of suspects. They also had, she argued, an excellent eye for detail and observational powers.

In this way, Warne was able to persuade Pinkerton to take her on. Two years after that, Pinkerton put her to the test by assigning her to an important embezzlement case. The Adams Express Company had been embezzled of $50,000 and the suspect was a Mr. Maroney. Warne proved her mettle by gaining the confidence of Maroney’s wife from whom she gathered valuable information. Eventually, with Warne’s assistance, the Adams Express Company recovered more than $35,500 from the embezzlers. Maroney ended up doing a 10-year prison stretch. Apparently impressed, Pinkerton started the Female Detective Bureau and put Warne in charge. In 1861, Pinkerton was hired to investigate damage to Maryland railroads by secessionists. While involved in this work, Pinkerton learned that more than railroads were at risk—that President Lincoln’s life was also threatened.

Kate Warne was one five agents sent to Baltimore, MD on February 1, 1861 to investigate the hotbed of secessionist activity there, which had reached such a fevered pitch, the feeling was that if Lincoln traveled through Baltimore, he would leave in a casket. And, thus, they nicknamed Baltimore “Charm City”. As part of her work, Warren played the part of “a rich southern lady … with a thick southern accent,” so she could infiltrate secessionist parties in Baltimore. They held these shindigs at places like the Barnum Hotel, which was apparently quite posh. And, by posing as a flirtatious Southern belle, Warne confirmed the plot to kill Lincoln and gleaned details of how it would be carried out.

Because Lincoln was traveling by training from Springfield, IL to Washington, DC and his route had to go through Baltimore, protective arrangements were made for him. That’s a whole ‘nuther story, which someone should write a book about. Unless, of course, it’s already been written. 🙂

Here’s a video trailer about Warne.