An Excerpt from My Next Book and the Cover Reveal! 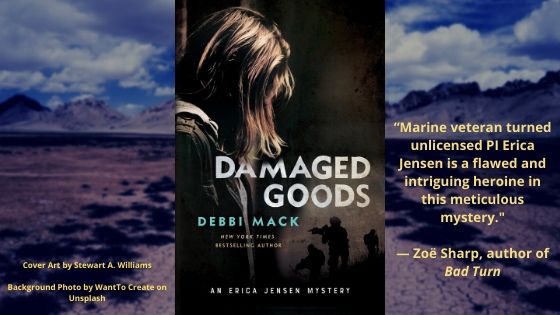 It’s been a few weeks since I posted the last excerpt from Damaged Goods, my next book, which is coming out on Saturday, May 23, 2020! I’m so excited, I can barely type this! 🙂 I’m literally using one hand and one pinkie! It’s amazing.

I also promised you a cover reveal. Well, look above. There you go! 🙂

So, here’s Chapter Three of Damaged Goods. And the cover is above!

As I drove home, I mulled Katie’s sister’s odd behavior. I understand why people want to be left alone, but looking up a number for me? To help find a missing person? Seriously?

I pushed aside further thoughts of Katie’s sister and her weird ’tude. That was her problem, not mine. I sped south down New Hampshire Avenue, turned onto Randolph Road, then wound through a series of backstreets toward Georgia Avenue in Wheaton, to my apartment and office therein.

I’d been lucky to sublet a studio I could barely afford at the Heights, a building rehabbed from a sixties-era mid-rise to gleaming high-rise splendor. It was a quick walk to the Metro Red Line. Not to mention all sorts of fancy new stores and the arts district. All part of the suburban renewal effort during the past few decades.

I pulled into the garage and parked as close to the entrance as possible. Grabbing my notes, I exited the car and walked up two flights to my place. The studio apartment was just big enough to suit my needs. A short hall led past the bathroom on the right and opened into my living room-dining room-kitchen-office-bedroom.

To the left, the wall displayed my flat-screen and a watercolor painting I’d found at a yard sale. To the right, a book shelf displayed an array of worn paperbacks. A bluebird-colored futon with a small desk behind it sat in the middle of the floor. Beyond the utilitarian living room/office, they’d squeezed a kitchenette into one corner and a nook in the other with just enough room in between for my emerald Formica-topped table and four matching chairs. From the table, a window revealed a lovely view of beautiful downtown Wheaton. I’d curtained off the nook, which held a makeshift closet and single bed, for privacy. Not that I hold parties or have many visitors. Or any visitors. But you never know.

My phone was blinking madly, indicating a message on my voice mail. I had a funny feeling I knew who it was, but checked it anyway.

“Erica.” The soothing voice of Susan, my therapist. “You’ve missed two group sessions in a row, without giving notice. Please call me when you get a chance.”

At least it wasn’t my mother. Thank God. She’d called once before in an outlandish attempt to fix me up with some “bright young man” who worked for a bank. The fact that my parents and I had spoken maybe twice since my return from overseas fazed her not at all. I made it crystal clear that I had no interest in her bright young man.

Neither of my parents understood why I joined the Marines. Frankly, it was to escape the oppressive relationship my parents had with me and each other. My father was one of those men who always wanted a son and my achievements were never enough. He also tended to boss my Mom around. Her responses were mostly passive-aggressive. She never really stood up to him, on my behalf or her own.

Returning Susan’s call could wait, but not too long, because I needed to make at least 25 sessions to officially establish my sobriety to the state’s satisfaction. First, I wanted to follow up on my big new case while my motivation was high. I erased the message.

I was about to boot up my computer when a black squirrel climbed onto the kitchenette’s window sill. He was such a frequent visitor, I’d installed a sliding window screen so I could feed the little guy.

Rocky gazed at me through the window as I fetched the jar of shelled nuts. He waited patiently, while I opened the window and handed him one. As he stuffed it in his mouth, I placed a small pile on the sill and closed the window. By the time Rocky had filled his mouth with nuts, his cheeks were huge lumpy bulges.

After feeding my “pet” squirrel, I pondered the next move while my laptop fired up. I logged into one of my paid databases and searched for Melissa’s last known address. A Baltimore City address came up. I noted it. Worth a visit.

For what it was worth, I tried to call Melissa myself. No answer. No voice mail. Okay.

Having failed to reach Melissa, I did a reverse search on her last known address and came up with another number. Now, we’re talking.
Using my own landline (and hitting the code to make my number private on the other end), I punched in the number and got a young-sounding woman on the second ring.

“Yes, hi,” I said. “Could I speak with a Ms. Melissa Blaine, please?” I added the “Ms.”, hoping to sound like the call was formal.

“That’s a shame,” I said. “I work for the law firm Dewey and Associates. Ms. Blaine has inherited money. Did she leave a forwarding address?”

“No, I’m sorry. The note she left with her last rent payment only said she was moving. She didn’t even say goodbye.” The young woman sounded more perplexed than upset.

“Exactly two weeks ago,” she said. “The rent was due that day.”

Before she and Blaine had last spoken.

“And I take it you haven’t heard from her?” I pressed on with ridiculous optimism.

On that happy note, we exchanged pleasant farewells and I hung up. Back to the drawing board.

I considered calling Melissa’s mother, but decided to hold off. Quizzing people by phone isn’t my first choice, and if Melissa had sought refuge from her father in California, what was the likelihood that her mother would talk to me about it?

And what about art school? Plus flying to California to confirm anything exceeded my three-hour limit and then some.

The art school was quite accessible. I could likely spare the time to poke around the campus in Baltimore City.

Also, a talk with Katie Saunders seemed to be in order. She was away at college—not hugely helpful at narrowing my search.

I did another online search on the terms “Damascus High” and “Saunders”. This time, I found a LinkedIn profile for Kathryn Saunders who’d graduated from Damascus High School. Now taking graduate studies at Columbia University in New York City. The experience section showed she worked as a teaching assistant in the English Department.

I called directory assistance for the Columbia University main number.

The woman who answered that number not only put me through to Katie’s office, but gave me the direct number to call for future reference. The phone rang twice, then a young woman answered. “English Department.”

“Hello, is this Katie Saunders?”

I ditched the notion of using my class reunion ruse, as Katie would probably call me out on it.

“My name is Erica Jensen, and I’m looking for Melissa Blaine. I’m in one of her classes at MICA. She seems to have vanished. I understand you two were high school friends. Have you heard from her, by any chance?”

“No. It’s been quite a while since Melissa and I last spoke. But you say she’s disappeared?” Katie’s tone struck me as worried.

“It would seem that way, miss.” Call her by her first name, I thought. I silently berated myself for my excess formality. Two years of coaxing information from Afghan women, while making sure they are in fact women, should have taught me that. “Her father doesn’t know where she is and hasn’t heard from her, but he gave me your name. Any idea whether she might have decided to move without telling anyone?”

This was the notion that niggled at the back of my brain. Maybe Melissa didn’t want to be found by her father. Would she tell anyone she knew, if she wanted to disappear completely?

“That doesn’t sound like her,” Katie assured me. “The last we spoke, Melissa was serious about attending art school in Baltimore. I can’t imagine her up and leaving there.”

“When was the last time you saw or spoke to Melissa?”

A long pause ensued. “It was after my graduation,” Katie said. “We had a girls’ night out up here in New York, but that was more than a year ago.”

“Did she say or do anything at that time that seemed unusual?”

“Unusual how?” Katie said. “I’m not sure what you mean. She was her usual self.”

“Is she usually happy with her life?” I pressed on.

Katie issued a short, uncomfortable laugh. Like a coughed giggle. “Well, she’s something of a temperamental artist. Melissa has her moods, but she didn’t seem to be troubled the last time we got together. How did you say you knew her?”

“We’re in the same class,” I blurted. “I’ve been planning a project and we were going to work together.”

“Just out of curiosity, can you think of any reason she might want to hide from her father? He has no idea where she is.”

“Oh, no.” Katie’s tone was dismissive. “Melissa depends upon her father for financial support, until after she turns twenty-five.”

Probably had a trust fund waiting for her.

“I understand her father didn’t approve of her going to art school,” I said.

“That’s true, but I don’t think he’d cut off her trust fund because of that.”

I hate talking to people by phone. I had no way of gauging Katie’s responses other than by her tone of voice. And even though New York was much closer to Maryland than California, a trek there would take all three hours I’d pledged toward finding Melissa.

I racked my brain to think of what I should ask. This could be my last chance for information from this source. “One last question. Why would your sister be reluctant to talk to me about this? When I spoke to her about talking to you, she wouldn’t give me the time of day.”

“I get that. Thanks for talking to me.”

“No problem,” she sang out. The line went dead.

And here’s the cover. Again! 🙂 Pre-order the book today at Amazon, B&N, Kobo, or Apple. Or buy it pre-sale at Smashwords! 🙂