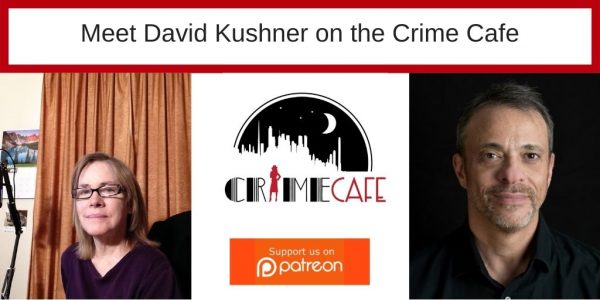 In a special “nearly end of the year” episode of the Crime Cafe podcast, my interview this week is with true crime author and journalist David Kushner.

Check out our discussion about the brutal murder that took place at the Texas Renaissance Fair and his nine-part series published on Substack.

For the ad-free version of the podcast and other perks, become a supporter on Patreon!

Also, take a look at David’s bio while you’re here!

David Kushner is an award-winning journalist and author. He currently publishes a newsletter on Substack called Disruptor. His books include Masters of Doom: How Two Guys Created an Empire and Transformed Pop Culture, Jonny Magic and the Card Shark Kids: How a Gang of Geeks Beat the Odds, Stormed Las Vegas, Levittown: Two Families, One Tycoon, and the Fight for Civil Rights in America’s Legendary Suburb, Jacked: The Outlaw Story of Grand Theft Auto,  Alligator Candy: A Memoir, and The Players Ball: A Genius, a Con Man, and the Secret History of the Internet’s Rise.

A contributing editor of Rolling Stone and Outside, Kushner has written for publications including The New Yorker, Vanity Fair, Wired, New York Times Magazine, New York, and GQ, and has been an essayist for National Public Radio Weekend Edition Sunday. His work is featured in several “best of” anthologies: The Best American Crime Reporting, The Columbia Journalism Review’s Best Business Writing, The Best Music Writing, and The Best American Travel Writing. He is the winner of the New York Press Club award for Best Feature Reporting. His ebook The Bones of Marianna was selected by Amazon as a Best Digital Single of 2013. NPR named his memoir Alligator Candy among the best books of 2016. The Alligator Candy podcast won the Best True Crime and Best Podcast Experience awards at the 2021 Popcon Podcast Awards, and is a finalist for Best Personal Lives Podcast at the 2021 New York Radio Awards.

Kushner also wrote the nonfiction graphic novels Rise of the Dungeon Master: Gary Gygax and the Creation of D&D and A for Anonymous: How a Mysterious Hacker Collective Transformed the World, illustrated by Koren Shadmi. He is the author of the ebook, The Bones of Marianna: A Reform School, a Terrible Secret, and a Hundred-Year Fight for Justice. Two collections of his magazine stories are available as audiobooks, The World’s Most Dangerous Geek: And More True Hacking Stories and Prepare to Meet Thy Doom: And More True Gaming Stories. His memoir Alligator Candy has been adapted into a serial podcast produced by Transmitter Media, Emmy Rossum, and NBCUniversal.

Many of his articles and books are being adapted for TV and film. Silk Road is based on his Rolling Stone story “Dead End on Silk Road.” Zola is based on his Rolling Stone article “Zola Tells All” and the tweets of A’Ziah “Zola” King; Kushner is an executive producer of the film. The upcoming Spike Lee Viagra movie musical is based on his Esquire article “All Rise.” A film based on his Vanity Fair article, “The Church of Living Dangerously” will star Christian Bale and be written by Charles Randolph. Writer/director Amma Asante is attached to a TV series based on his book, Levittown.  Gamechangers, a BBC film, is inspired by his book Jacked. He has been featured in several documentaries including What Will Become of Us, a feature about Holocaust survivor and shopping mall magnate Frank Lowy. Kushner has taught as a Ferris Professor of Journalism at Princeton University, and an adjunct professor of journalism at New York University. In the early 90s, he was a producer and writer for SonicNet, one of the first music destinations online. He serves on the board of directors of Good Grief, an organization that provides grief support services to children and families.