This week I have a guest post and book giveaway from true crime writer Rod Sadler.

To enter the giveaway for a free signed copy of KILLING WOMEN, be the first person to email Rod at rodsadlerauthor@gmail.com and mention the Crime Cafe in the email.

Include your name, address, a phone number, and any personalized signature note you might like inside the book. And be sure to mention the Crime Cafe.

And check out Rod’s extraordinary story below. If you were to write a letter to a serial killer, would you know how to start it?  The correct answer is with someone else’s return address.  While I was writing Killing Women, the true story of East Lansing, Michigan, serial killer Don Miller, I reached out to his attorney for an interview, then asked if Don Miller would consider a face to fact session with me.  He didn’t think that Miller would, but he gave me the killer’s father’s contact information and thought he might be a good contact.  I wrote a letter to him and never expected to hear back from him.  A few weeks later, while I was preparing to do a phone interview with the sister of Miller’s first victim, my phone rang.  It was Don Miller’s father.  Now faced with two critical interviews for the book at virtually the same time, I put Miller’s father off for an hour while I interviewed his first victim’s sister.  When I called his father back, he was very cautious, and I expected that.  By the end of my interview with him, while still guarded, he said he would reach out to his son in prison to see if he would at least write a letter to me.  I decided I’d believe it when it arrived, if ever.

We had a gathering at our home on the Saturday before Easter Sunday so I didn’t get a chance to walk out to the mailbox.  On Easter Sunday, I made my way to the roadway and reached inside.  A letter from a serial killer on Easter Sunday was unusual to say the least.  At the top of the letter was a large handwritten greeting that read “Happy Easter.”  It was brief, but the killer said that he’d write another letter in the near future detailing what he was going through in the mid-seventies when the crimes occurred. 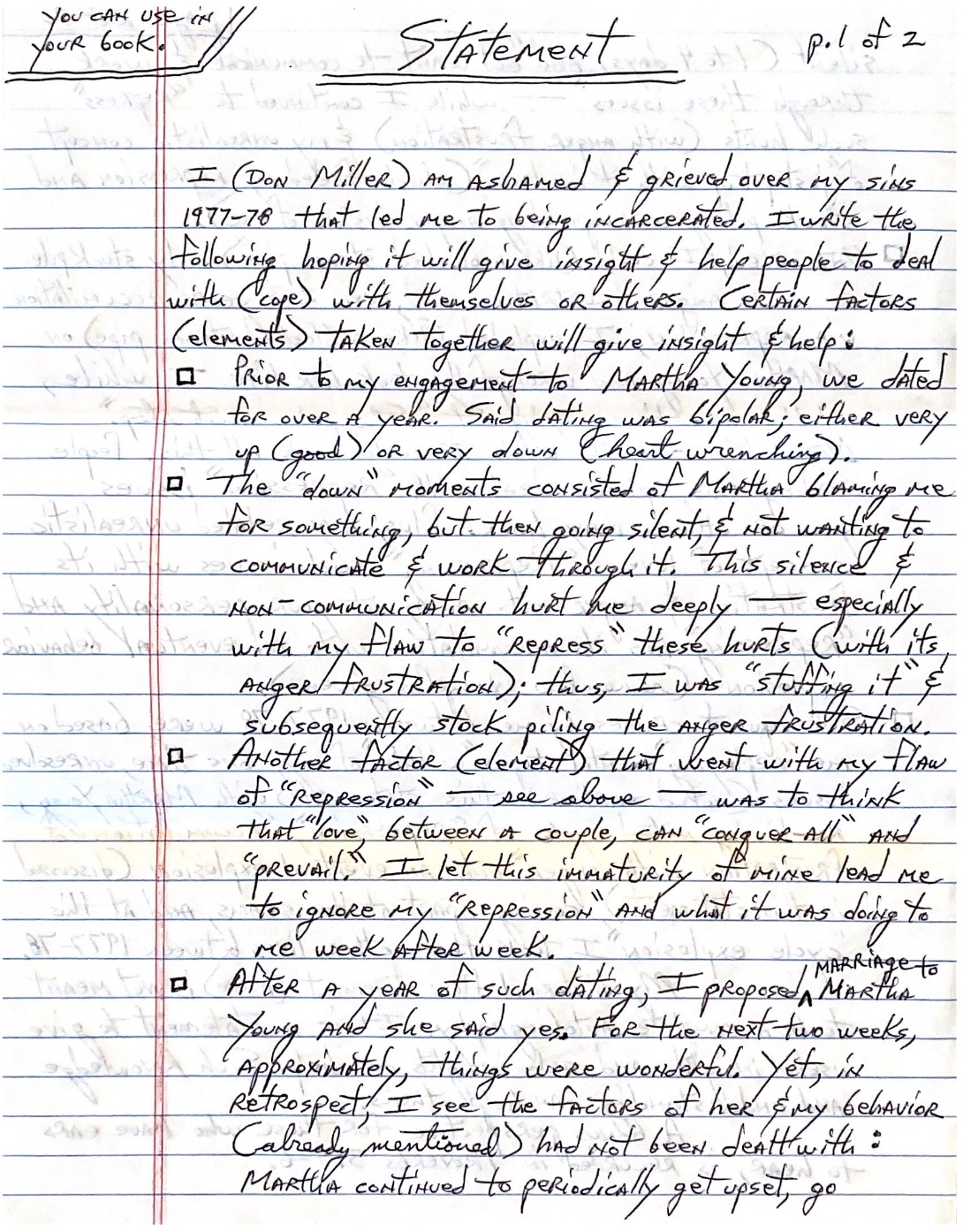 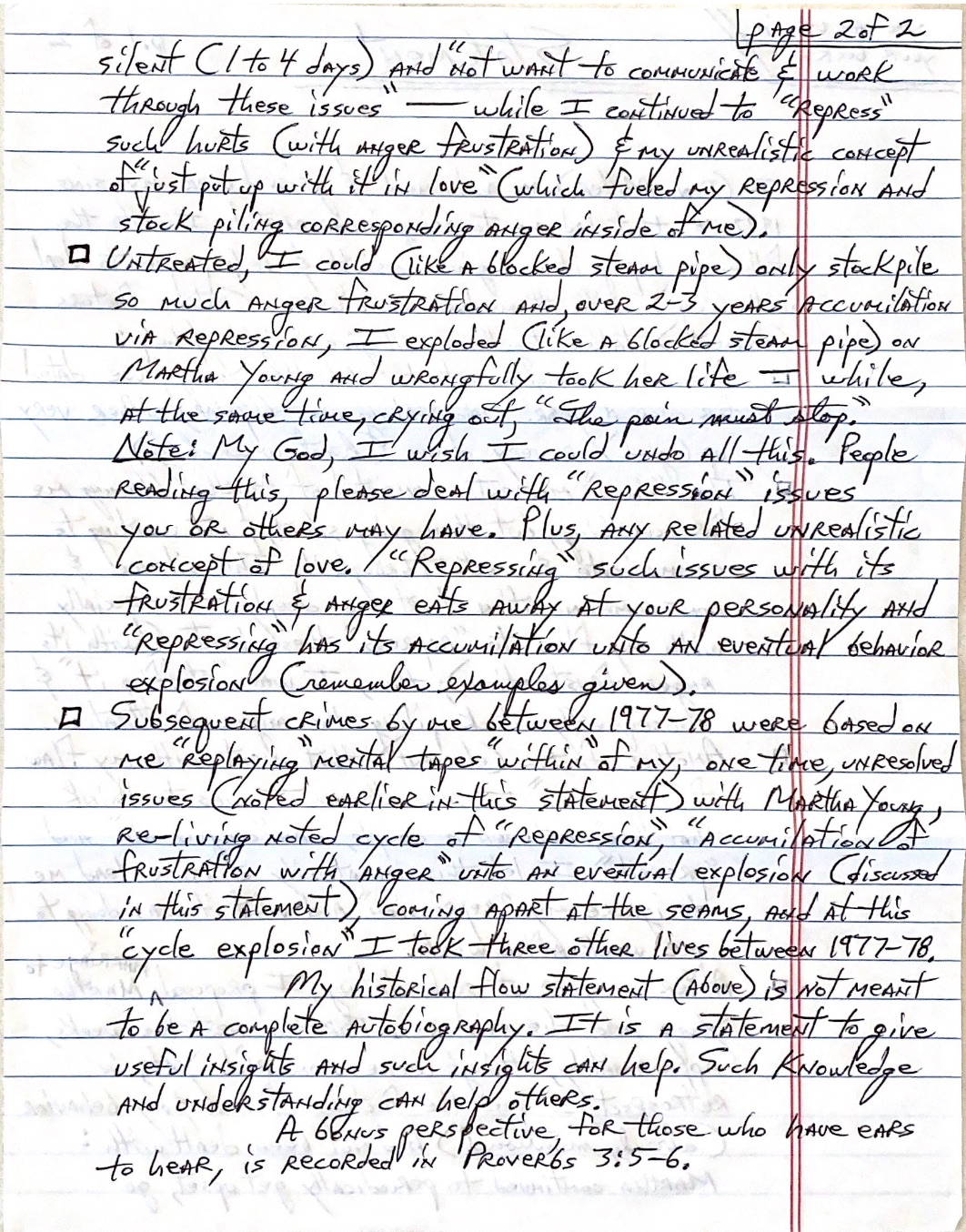 In a more detailed letter I received later, he described his relationship with his fiance’ and her inability to communicate with him over personal matters.  According to him, it drove him to take her life, and subsequently the lives of three other women.  After reviewing his letter, I noted some things that were obvious.  The most important thing was he never mentioned the rape and attempted murder of a fourteen-year-old girl and the attempted murder of her thirteen-year-old brother.  Those were the crimes he was convicted of by a jury, and those were the crimes he was incarcerated for. Killing Women is a very detail oriented true crime book the chronicles the investigation into the mysterious disappearances of four women from East Lansing, Michigan, in the mid-seventies, and the rape and attempted murder of two teens.  Beyond that, it details why the East Lansing serial killer isn’t in prison for murder, and why he’ll inevitably be released from prison in 2031.  I’ve included the letter he wrote to me for your review. As a decorated police officer, Rod Sadler’s ability to document Michigan serial killer Don Miller’s case comes from a unique law enforcement perspective.  For his entire thirty years in law enforcement, Rod fostered relationships with many of the key people involved in the investigation, prosecution and even the defense of serial killer Don Miller.  This list includes acquaintances of the killer, police officers, detectives, prosecuting attorneys, judges, and the killer’s own attorney.  Those personal and professional friendships continue to this day.

Rod’s police career began in 1981 after obtaining an associate degree in Police Administration and completing the Mid-Michigan Police Academy at Lansing Community College. He later continued his education and obtained his bachelor’s degree in Management and Organizational Development from Spring Arbor University.

Rod had police work in his sights even before completing high school when he attended a law enforcement career camp sponsored by the Michigan State Police.  His interest intensified as he approached his high school graduation and prepared for college in 1978, while at the same time following media reports of a criminal justice major from nearby Michigan State University and the four women he was suspected of killing.

During Rod’s tenure in law enforcement, first as a deputy sheriff and eventually as a sergeant, he investigated a myriad of violent crimes including homicides, armed robberies, kidnappings, criminal sexual assaults, bank robberies, narcotics investigations, domestic violence, child abuse, and an assortment of other offenses.  He served in several different capacities during his career, to include investigations, traffic enforcement, forensic art, field training officer, emergency management, and traffic crash reconstruction.  After his promotion to sergeant in 1999, he served as a patrol supervisor until his retirement in 2012.

It was late in his career when, after receiving his bachelor’s degree, he discovered his love for writing about what he knows best…true crime.

Rod’s first two books, To Hell I Must Go and A Slayer Waits, are both Michigan true crime stories set in 1897 and 1955 respectively.

His latest book, Killing Women, details East Lansing, Michigan, serial killer Don Miller who will ultimately be released from prison in 2031.  It was an Amazon Best Seller.