Book Review: ‘Faster Than the Speed of Light’ 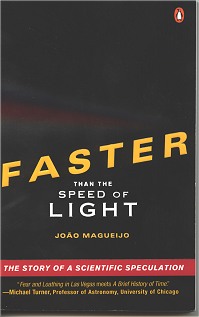 Review of FASTER THAN THE SPEED OF LIGHT (Perseus Publishing 2003)
Author, Joao Magueijo

I was inspired to read FASTER THAN THE SPEED OF LIGHT after seeing a special on the Science Channel in which Joao Magueijo explained his theory about the speed of light not being constant. He developed the theory that light may have moved faster when the universe was created than it does now, as a way of explaining certain paradoxes about the “Big Bang” theory that have confounded cosmologists (scientists who study the origins of the universe–not to be confused with cosmetologists) for decades. Since this theory contradicts one of the long-held tenets of Einstein’s special theory of relativity (that the speed of light is constant), Magueijo’s work was widely pooh-poohed and he was called quite a few bad names for his efforts — as I recall, words like “moron” and “heretic” had been tossed about.

Needless to say, I was intrigued. I had to find out more.

See, once upon a time (so long ago, it seems like another lifetime), I studied physics and even took a course in relativity. In fact, the idea of studying cosmology — understanding how everything was created — seemed incredibly appealing. I was ultimately done in by the math. It just turned out not to be my thing. Words are my thing. I turned to them instead.

I approached this book with some trepidation, concerned that it would be far too technical for me to enjoy after lo these many years of not doing hard science. Turns out I had nothing to worry about, because this book is about more than just science. It’s about the people who do the science: how they work; how they collaborate, clash and compete with one another; and the resistance they encounter from various quarters when they take their theories to the bleeding edge and explore strange and controversial new possibilities. In short, it’s about the human drama associated with science, along with the theory Magueijo created.

The book was a real eye-opener, in terms of finding out how contentious scientists can get with each other over these theories. All the name-calling that I took as a sign of others feeling threatened could just as easily have been typical posturing among Magueijo’s peers from the sound of it. And I had to laugh (in sympathy) at his description of the agonizing process of getting one’s theories published. Magueijo makes the academic publishing world sound about as arbitrary and capricious as the literary one.

Magueijo’s writing also makes the book easy to digest. The science can get a bit heady at times, but if you don’t get too put off by it, his stories and (sometimes delightfully ribald) sense of humor make the reading well worth the effort.

In the book, to a greater extent than the TV special, Magueijo discusses how others have come up with their own VSL (variable speed of light) theories — some of them prior to his doing so. And, since he was finding support among other scientists before he wrote the book, what may have seemed crazy in the 1990s may seem less so now. This book was published in 2003, so even more scientists may have signed onto it during the last five years, for all I know.

The book even served as a review of what I learned in that relativity class. Plus I learned a bit more. And while I would hardly consider myself a cosmology expert after reading this book, I can say I have a slightly better understanding of the science, along with a much greater appreciation for the trials and tribulations of those who are pushing the envelope in the field.

As a side note, this book inspired me to write a thriller based upon one of Magueijo’s theories and the “super volcano” under Yellowstone National Park. The plot is a bit complicated, so I’ve held off on self-publishing it, for the time being. However, who knows? I still think it has promise, and I may eventually get around to revising and publishing it.