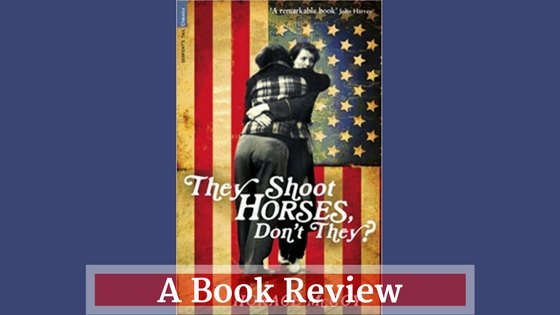 The review for this recommended reading was originally posted on another blog on August 6, 2008.

Sydney Pollack and friends turned it into one heck of a great movie, but THEY SHOOT HORSES, DON’T THEY? started out as a book—I’d call it a novella, though one blurb on the back described it as a “short novel”—not sure what the difference is or if there is a difference, but I can tell you the book is excellent.

THEY SHOOT HORSES is written in what could best be described as lean prose. Total economy of description, with an emphasis on dialogue and the thoughts of the main character, Robert Syverten. Robert is an aspiring director in Depression Era Hollywood—he comes on all humble, saying he wants to start out making two-, maybe three-reel shorts, but in the back of his mind he pictures himself becoming greater than Eisenstein. He accidentally meets up with Gloria Beatty, a woman from West Texas who has had a rough life and looks a bit too worn around the edges to make it into Central Casting, where most aspiring actors at the time tried to get noticed (which is to say, she doesn’t look a thing like Jane Fonda, though I still love Fonda’s portrayal, even if she is too pretty for the part by far and sounds like she learned to swear in prep school).

They wind up entering a dance marathon, not only for the $1,000 they could win, but to get the attention of Hollywood big shots who come to watch. Much like Romans watching the gladiators, as it turns out. Or maybe more like Christians getting thrown to the lions.

Robert describes the horror of the marathon—especially the grueling derby race scenes, the couple-by-couple attrition as the hours drag on—with the kind of matter-of-fact detail that seems appropriate for one who is telling the story in flashback after being found guilty of murdering Gloria. (And this is not a spoiler. This is revealed on the first page.)

The narrative goes back and forth between what the judge is saying to Robert while passing sentence and the events that led up to Robert’s plight. Events, I might add, that differ significantly from the movie. Further, Robert’s peculiar friendship with Gloria—one in which he sympathizes with her, despite her flaws and her not being the best of all people—is more fully explored in the book than the movie. And better explains the ending, which is shocking but more perplexing in the film because you’re given less information about why he did it.

You can buy the book on Amazon, Barnes & Noble, Apple, and Indiebound. The Amazon and Apple links are affiliate links, which means if you buy through them, I’ll get a small commission. Just to be agonizingly clear about that. 🙂