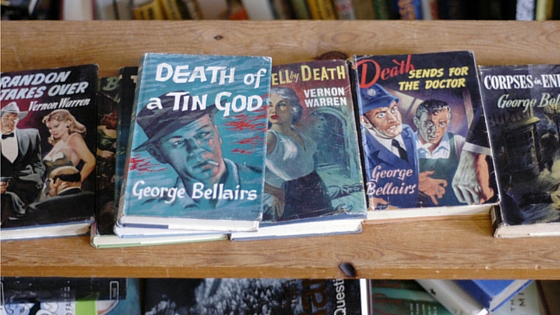 If you’re interested in knowing more about the authors (past and present) who have most influenced my crime fiction writing, here’s a list of some of my favorites. In no particular order, of course.

1) Sara Paretsky: the amazing author who brought us VI Warshawski is also the one who founded Sisters in Crime, an awesome organization that supports women mystery authors. Men are more than welcome to join, as well.

2) Sue Grafton: Kinsey Milhone is the kind of private eye I would’ve liked to write about if Grafton hadn’t beaten me to it. Grafton’s ability to craft a mystery novel around each letter in the alphabet is nothing less than astonishing.

3) Ross Macdonald: as pulp fiction writers went, this author created a most memorable character in Lew Archer. The Archer series explored psychological depths of character, along with society’s ills, in a way I find most inspiring. For some reason, they changed his name to Harper for the movies. Go figure! 🙂

4) Robert Crais: when everyone told Crais the private eye novel was dead, he wrote one anyway. Today, his Elvis Cole series has received multiple awards. Not only that, but Elvis’s sidekick (the baddest badass of them all) Joe Pike has his own series. In addition, Crais has gone on to create even more protagonists with their own series. He is truly, as he once described himself, a “blue-collar writer.”

5) Mercedes Lambert: it was after I started my own series that I found out about Lambert and her books about a former Marylander who’d moved to California and become a lawyer. Whitney Logan became an inspiration for me after the fact. Due to an untimely death from cancer, there are only three books in that series. However, Lambert also published a novel called El Niño under her real name Douglas Anne Munson. Her books focused on the inequities of the criminal justice system, based in great part on her experience as a lawyer handling child abuse and neglect cases in Los Angeles.

6) Dashiell Hammett: the creator of the famous Sam Spade based the tough guy private eye’s persona on his experiences as a Pinkerton detective. It’s a shame that the only book featuring this character was the excellent The Maltese Falcon. Even so, Hammett’s terse pulp fiction prose is well represented in his Continental Op short stories and other novels such as The Thin Man and Red Harvest.

7) Walter Mosley: to read a book by Walter Mosley is to read something truly exquisite. As others have noted, his writing has almost a jazz-like rhythm to it. But more than that it explores race in this country in a manner unlike most well-known private eye novelists of the past. Mosley is not only a prolific author, but one who has written in different genres — and done so successfully. That’s no small feat.

8) Judith Van Gieson: back when I was contemplating what type of mystery I wanted to write, I happened upon a review of one of this author’s books. It interested me enough to actually read the book. Once upon a time, this author wrote mysteries about a female attorney in Albuquerque, New Mexico who solved crimes connected to her cases. I had considered writing a mystery about an attorney, but didn’t want to write a legal thriller with a lot of courtroom scenes. It was Van Gieson’s Neil Hamel series that showed me a solo attorney could make a believable private eye. Not only that, but she wrote in a hard-boiled style that wholly appealed to me.

9) Margaret Millar: the wife of Kenneth Millar (aka, Ross Macdonald), Margaret Millar had a knack for writing psychological suspense. Like her husband, she explored the layers of her various characters. And the books I’ve read by her always seem to end with a devastating twist. Among her works, the private eye novel that sticks with me most is How Like an Angel.

10) Raymond Chandler: this list would not be complete without mentioning Chandler. The combination of plot complexity and one-line zingers from Chandler’s protagonist, Philip Marlowe, make Raymond Chandler’s reading mandatory for anyone who wants to write hard-boiled private eye fiction, in my opinion.

By the way, in a departure from my series, I’m getting ready to publish a thriller. If you’d like a sample of my upcoming novel, just click here.

I’m also putting together a team of crime fiction enthusiasts to help spread the word about my crowdfunding campaign for the Crime Cafe boxed set and anthology. If you’d like to learn more about that, please click here.