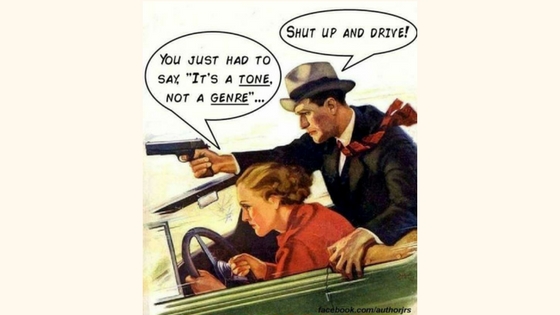 This weekend, I happened across a few inspiring tweets that really summed up why I write my books the way I do. Needless to say, I’m inspired to a great extent by the world of hardboiled fiction! 🙂

I often think about Raymond Chandler’s take on police methods as shown in documentary-style noir HE WALKED BY NIGHT (1948): pic.twitter.com/nchvg7OMi5

This week’s #TCMEssentials pick is the noir The Big Sleep starring Humphrey Bogart and Lauren Bacall. On at 8 pm Saturday. #TCMParty pic.twitter.com/3VyIhwZO7X I WAKE UP SCREAMING is a underseen noir in which… well, without spoiling too much, let me say it features one heck of a nasty detective. pic.twitter.com/pXiz9RbY0c I’ve been feeding this stray kitten for weeks. Finally coaxed him indoors… and it turns out he really likes film noir. pic.twitter.com/kRmTimOC2L

On that note, I’d greatly appreciate your taking a short survey. It’s only three questions and will take no time. This will give me a much better idea of what to write for you! 🙂

BTW, if you check the sidebar, you’ll see a thermometer-like thing that shows how much net profit I’m making from my books. Right now, it’s less than zero. However, as soon as I show a net profit from book sales, I’ll change the level accordingly.

Now, if I make $100 net from my book sales, I’ll donate 10% of the net to Mystery Loves Company in Oxford, Maryland.

If I make $1,000 net from my book sales, I’ll split the 10% donation between Mystery Loves Company and Novel Books in Clarksburg, Maryland.

If I manage to reach $5,000 net income from my book sales, I’ll split the 10% donation between Mystery Loves Company, Novel Books, and Books With A Past in Savage, Maryland.