Why I Stopped Practicing Law to Become a Writer 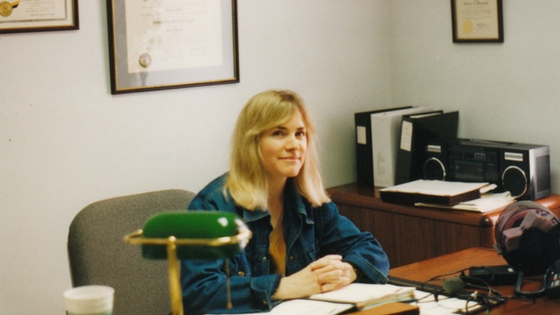 Yes, that’s a photo of me in my law office! Many people have asked me why I stopped practicing law to become a writer. Well, here’s a real-life example of one particularly weird experience as a solo practitioner.

In an actual pro bono case I was assigned, the potential client actually stole my wallet from my purse, while I was out of the room, making copies of some documents.

I was seeing this client at a place outside my office in downtown Baltimore (on a pro bono basis, no less). Can you believe that? Well, I can. In fact, I can believe all sorts of things. Because, unfortunately, truth is much stranger than fiction.

Well, when I realized my wallet was gone, I stopped the client, who was getting ready to leave and asked her outright, “Um … did you take my wallet?” I didn’t know what else to do, so I just asked.

So, she just started taking things out her purse and pockets, to show she didn’t have it, and never acted surprised that I asked. I knew right then that she had done it. I just couldn’t prove it. I wish I’d thought to call security, but the whole thing took me so by surprise that I was caught off guard, and she left before I thought to do so.

I called my husband, and we had to go through the whole shebang of cancelling my credit cards, getting a new driver’s license, and so on. Then, we got a phone call from some guy in West Baltimore who claimed he found the wallet in the gutter. The driver’s license was there, but the cash and credit cards were missing. Then, it turned out the dumb bitch had tried to order stuff from Fingerhut on one of my credit cards, under the name of “Miss Person.” Nice try, stupid! 🙂

And guess where Miss Person lived? Right down the street from the guy who called about finding the wallet. What a co-ink-a-dink, huh?

So … my husband went to West Baltimore to retrieve the wallet. I won’t bore you with all the details, but you could say the people there were just a bit surprised to see him!

But what I said about the client (whose case I declined, as you can imagine) is absolutely true!

So, you can see how practicing law can be a bit less than glamorous. Really!

And it also gives you an idea why I write hardboiled mysteries about a Maryland lawyer who solves crimes related to her cases.

You may recall the first book in the series. It’s called Identity Crisis. Feel free to click here to see all the places you can buy it! And if that sounds awesome, don’t forget that you can get a free copy of the second Sam McRae mystery here! Just click that link and fill out the info. PS: Don’t forget that you can get 16 free thrillers here! 🙂 Just click that link and scroll down to check the list.

Be sure and take advantage of the thriller special before midnight on Friday, April 7! Because that’s when it … expires!