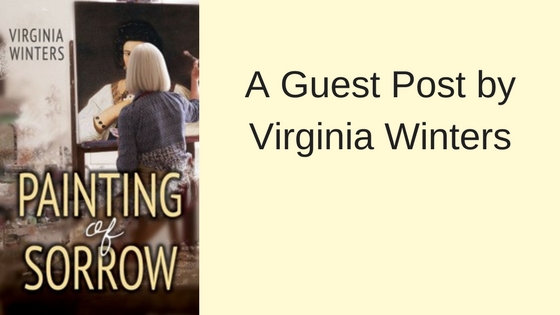 She’ll tell you all about Painting of Sorrow here.

Painting of Sorrow by Virginia Winters

I began Painting of Sorrow because I was interested in lost and destroyed paintings of WWII. Searching for paintings that could have been saved but were said not to be, brought me to the Flakturm Friedrichshain in Berlin, an anti-aircraft tower used to house a bomb shelter and a hospital as well as the paintings of the Kaiser Wilhelm Museum. More than four hundred paintings and three hundred sculptures were burned, stolen, or destroyed by bombs in the waning days of WWII. Did the Soviets loot the building before it burned? Or were some of the paintings stolen when the Soviet guards were inexplicably removed?

One such painting was called variously Portrait of Fillide or Portrait of a Courtesan, a work by Caravaggio. Client Simon Wolf brings a copy of the painting to be conserved by the firm where Sarah Downing works.

Is it a copy or an original? It’s Sarah job to conserve it but she wants to know the truth about the painting.

Sarah is a painter as well as an art conservator. Her mind reacts to situations, landscapes, and people by seeing paintings in her memory that describe them. Throughout the book, images of paintings also reflect her emotional state and her fears.

Early in the book, the director of the Art Gallery that is housed in the building where she works, frightens Sarah. Her mind brings up a picture of St. Jerome, an almost cadaveric man pictured in a desert, by Da Vinci. The taut skin of his face reveals the skull beneath. Sarah escapes a killer with her friend Peg. On the way, they stop at a lookout over Mazinaw Lake. Casson painted the iconic Bon Echo Rock there.

Later, approaching the security of a remote cabin in rural Ontario, she sees the building as a painting by A. Y. Jackson, Settler’s Home and somehow felt safer, for the moment.

Her visions become darker and when she finds her new love Simon, beaten by her ex-husband, The Death of Marat by David, a nightmare of a painting intrudes on her thoughts. At the hospital, the controlled chaos of Emergency Room, by Fiona Rae reflects the roiling state of her emotions.

Much later, arriving to Simon’s home, afraid that all chance of a relationship with him has gone, she sees not his house, but Carl Schaefer’s Ontario Farmhouse, dark clouds looming over it, perhaps an omen for her future

I hope interested readers will search out the paintings mentioned in the book to gain a fuller understanding of Sarah and the events that changed her life.

You can find out more about Virginia here: https://ginny200.com/