Looking for a Good Thriller Novel? 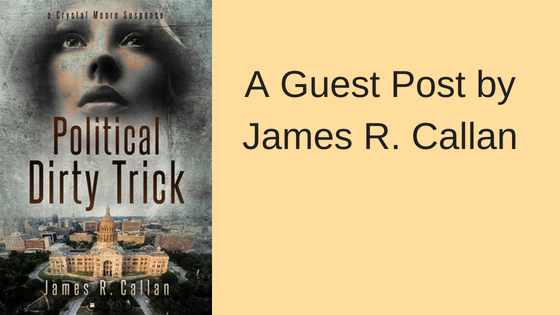 In the event that the current political climate isn’t sufficiently thrilling for you, my guest blogger today has written a thriller novel that may be just what you’re looking for!

Author James R. Callan is my guest today, and here’s what he has to say about his thriller novel Political Dirty Trick . In any event, here’s James!

Crystal’s good friend, Ron Drake, is a shoo-in to win the gubernatorial race in Texas. Two volunteers in the opposition camp (George and Ginnie) believe their candidate’s only chance is a political dirty trick that will sink his numbers in the polls. They construct an elaborate hoax and with a source in the D.A.’s office, leak fake news to the media.

The dirty trick is successful and Drake’s numbers plummet. But things go wrong and a man is killed. Ginnie is determined not to get caught for the man’s death, and to cover it up, another man is killed.

Crystal sets out to find who is leaking the unfair information. She has no idea the murders are connected to the fake news. But as she begins to gather clues, Ginnie decided no one is looking for her or George – except Crystal. To Ginnie, Crystal must be eliminated and she makes several attempts on Crystal’s life.

Drake’s once invincible lead evaporates and on election day, he comes in second. But the election isn’t over. The attempts on Crystal’s life aren’t either. Drake may lose the election. And Crystal may lose her life.

Political Dirty Trick is the third of the Crystal Moore Suspense Series, but it can be a standalone read. Nothing from the previous books in the series is needed to fully enjoy this book.

Senior Reviewer D. Donovan of Midwest Book Reviews said, “Powerful in its characterization, plot, and narrative interactions, Political Dirty Trick is the item of choice for thriller readers who like their stories steeped in realistic scenarios and possibilities.”

Thriller writer William Doonan said, “It’s tight, it moves along at a nice clip, the characters are engaging, and the tension is real.  It reads like a fast-paced James Patterson cliffhanger.”

It is available in digital, paperback, and hardcover formats from Amazon by clicking here or from IngramSpark.