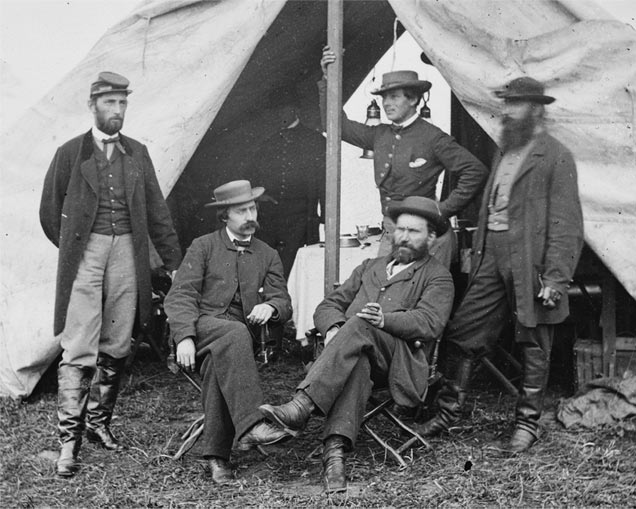 As discussed previously, along with her distinction of being the first female detective for the Pinkerton Agency, Kate Warne did intelligence work during the Civil War. As a woman, she could easily attend social gatherings and worm secrets from people.

After thwarting the assassination attempt on Lincoln, Warne continued to travel with Pinkerton as his Female Superintendent of Detectives. When the first shots went off at Fort Sumter, Pinkerton sought the President’s approval to provide services to the Union. However, before Lincoln could respond, Union Major General George B. McClellan asked Pinkerton to create a military intelligence service for McClelland’s command. Pinkerton, Warne, and two other men set up headquarters in Cincinnati, Ohio, in response. Allan Pinkerton with Lincoln and McClennan at Antietam

After the war, Kate Warne worked surreptitiously on various cases. One was the murder of a bank teller, in which the killer made off with $130,000. Lacking the hard evidence needed to nail the prime suspect, Warne went undercover and befriended the suspect’s wife. With the knowledge she obtained, they were able to recover the money.

In another case, a certain Captain Sumner believed that his sister and a Mr. Pottmore were trying to poison Mrs. Pottmore and himself (Sumner, that is). Under the assumed name of Lucille, Warne pretended to be a fortune teller and wheedled information from the suspected murder’s confidantes. Warne also continued to manage the agency’s other female detectives. Allan Pinkerton called Kate Warne one the five best detectives he had. Her work for Pinkerton struck a major victory for women in crime fighting. Women were not allowed to join police forces until 1891 and could not make detective until 1903. But it’s likely that Warne helped pave the way for those changes.

Finally, if you’re a fan of strong female detective-types, grab a free copy of one of my Sam McRae mystery novels by clicking here! Do it now and you can qualify for a free copy of my latest thriller The Planck Factor and possibly more! I have a print giveaway contest going until Dec. 30. So act now! 🙂