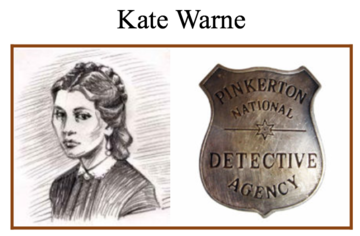 To pick up from where I left off in the first part of Kate Warne’s story (the story of the first female Pinkerton detective), Warne was tasked with keeping Abraham Lincoln safe from would-be assassins in Baltimore.

The plan was to create a diversion at a railroad stop, thus distracting officials from guarding the President (who would then be set upon by a mob of killers). Pinkerton had Warne hand-deliver the details by train to congressman Norman B. Judd, who then arranged to meet with Pinkerton and the President.

And while Lincoln was skeptical at first, another source confirmed the plot to take him out. At that point, President Lincoln decided that an ounce of prevention was worth a pound of cure, so to speak.

Even though Lincoln kept to his speaking schedule, he deviated from it long enough to disguise himself as Warne’s invalid brother. Pinkerton shut down the telegraph (you know, the old-school Internet) to keep word from getting out about the plan. At Harrisburg, Warne entered the sleeping car with Pinkerton, Ward Hill Lamon (Lincoln’s friend and self-appointed bodyguard), and President Lincoln in his disguise, greeting the President like a long-lost brother.

Kate Warne provided the disguises that got Lincoln through Baltimore without being recognized. It is also said that Warne didn’t sleep throughout her guard duty. Thus, it is believed that the Pinkerton Agency’s slogan “we never sleep” was inspired by Warne’s vigilance during that trip. Warne not only uncovered the plot against Lincoln, but made most of the arrangements to smuggle him into DC. These included delivering secret information and setting up meetings, along with reserving four berths on the train from Philadelphia, ostensibly for her sick brother and family members. On top of which, Warne kept a constant lookout on President Lincoln throughout the trip.

In my next segment on Warne, I’ll discuss her work in espionage during the Civil War. PS: If you enjoy stories about female sleuths, just click here and enter your name and email to get a free copy of one of the Sam McRae mysteries!