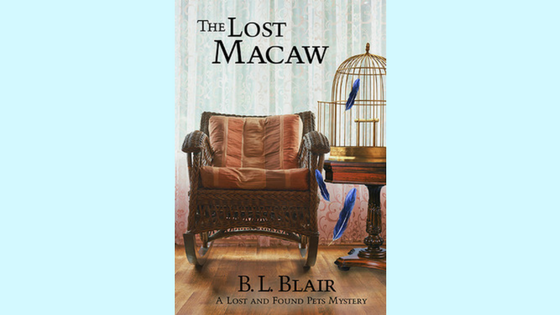 Today, I have another guest post from mystery and romance author B.L. Blair., who’s written four novellas in the Lost and Found Pets series.

This post features an excerpt from the fourth book, THE LOST MACAW.

The Lost Macaw is the fourth novella in the Lost and Found Pets series. Alexandra Prescott is a licensed private investigator specializing in finding missing animals. Reuniting pet and owner is more than just a job.

A former client hires Alex to find her lost parrot. The bright colored bird has flown away before, but this time there is evidence that Molly was kidnapped. The demand is simple—the bird for the pictures.

When her client suffers a stroke, Alex is left with a ransom note, a missing bird, and some very incriminating photos. She is in a race against time to solve the mystery of the lost Macaw. “Your little old lady is quite interesting, Alex,” Halie said.

“She didn’t exist until about thirty years ago.”

“I did a preliminary background search on her. In general, she is clean. No debt. The house is paid off as is her car. The one thing that jumped out at me was the fact that she had a safe deposit box at four different banks.”

Luke raised one eyebrow. I got a sinking feeling. I had noted the bank accounts but hadn’t really given them much thought.

“So why does an eighty-year-old woman need four safe deposit boxes?”

“Why does she need more than one?” Luke muttered.

“Exactly,” Halie said. “So I dug a little deeper.”

“What did you find?”

“About thirty years ago, Joseph and Trudy Kearns purchased the house on Carriage. Back then, it was a new neighborhood, and the prices were cheap. They paid cash. They also opened a bank account, and Joe got a job working for the city. Those are the first records I can find for either one of them.”

“Trudy would have been fifty at that time. Her husband probably a few years older. What about birth certificates? Social security cards?”

“They had them, but conveniently, they were issued from a small county in Virginia where a massive flood destroyed all their records. The county office was in the process of moving the old paper records to electronic when the flood hit.”

“Let me guess. The Kearns’s records did not survive the flood.”

“So the only records for them are the ones they had in their possession.” I paused a moment. “Do they look real?”

“So they could be authentic.”

“Or really good forgeries. In some ways, it was easier back then.”

“Anything else?” I asked.

“Not really. Lives on a fixed income of social security and a small pension from her husband’s job. It isn’t much because he only worked for the city for twelve years before he had to retire.”

After ending the call, I looked at Luke. He had a perplexed look on his face that I had a feeling mirrored mine.

“Who the hell is Trudy Kearns?”

The book is available on Amazon, Nook, iBooks, Kobo, and Smashwords. Get it today! 🙂