Great Crime Fiction to Give as Presents 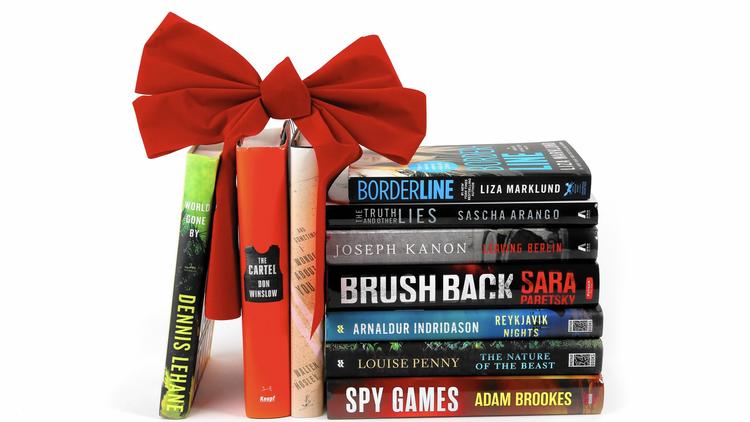 From Sascha Arango’s “The Truth and Other Lies” to Don Winslow’s “The Cartel,” a holiday season’s worth of books from the dark side. (Keri Wiginton / Tribune)

Now that the holiday season is upon us (you do realize that Christmas started on Black Friday, right?), I’d like to point you to some suggestions for great crime fiction to give as gifts.

This list of crime fiction to give as gifts provided by the Chicago Tribune includes mostly books I haven’t read, but sound interesting.

Here are just a few examples:

A wickedly good first novel about a sociopathic drifter who becomes famous by selling the manuscripts he finds under a female pickup’s bed. After marrying her to cash in on more of her quickly tossed off novels, he must concoct his own fictions to avoid suspicion in a series of killings.

British journalist Philip Mangan, who doubles as a spy, becomes involved in a dangerous cat-and-mouse game with a Chinese military group following a terrorist bombing in Addis Ababa. Their bait: defense secrets Mangan’s bosses are eager to get hold of. His fear: becoming an MI-6 “cutout,” left to fend for himself.

I love great spy novels. Not to mention hardboiled mysteries.

But I will mention one in particular that I am reading and that actually made this list. It’s And Sometimes I Wonder About You by Walter Mosley.

Here’s what the Chicago Tribune had to say about it:

Grizzled, philosophizing New York P.I. Leonid McGill needs to find a missing woman who stands to inherit millions; save his son, who is working undercover for ruthless thieves; and deal with the arrival of his long-missing anarchist father, Tolstoy. Only the great Mosley could make this center hold.

And this article serves as a reminder that I still need to read Sara Paretsky’s latest!

Asked to look into the long-ago murder conviction of her high school boyfriend’s mother, V.I. Warshawski reluctantly returns to the gritty South Chicago neighborhood where she grew up and becomes caught up in an unholy tangle of lies and deceptions.

Check out all the reviews in this article! And if that link doesn’t work for you, here’s the 12 Best Private Eyes in Crime Fiction, according to Crime Fiction Lover. Whatever book you choose to give, here are 11 reasons why you should give a book this holiday season!

Coming soon … why book signings are awesome! I know my own book signing at the University of Maryland on Saturday was amazing, in so many ways!