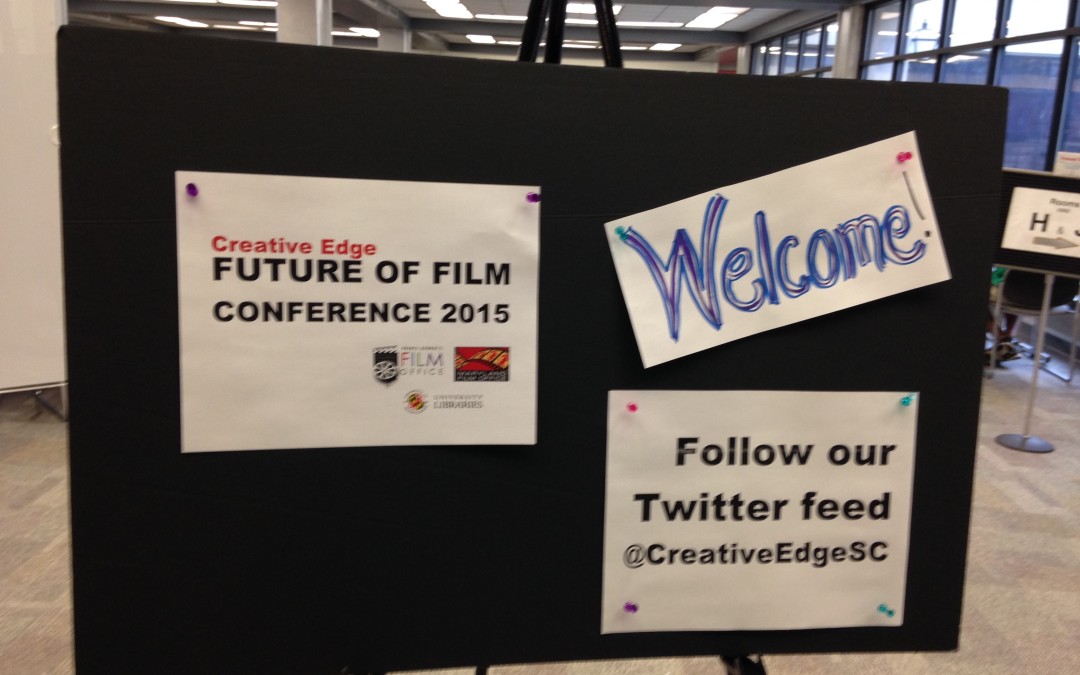 I spent Saturday doing the most awesome thing. I attended the Future of Film Conference at the University of Maryland. The conference was held at one of my old haunts, Hornbake Library, formerly known as the Undergraduate Library. You see, they have two big libraries at the University of Maryland: Hornbake and McKeldin. I always preferred McKeldin, because it was so old and library-like.

Unfortunately, I didn’t have a chance to take a photo of McKeldin, because I was so busy being blown away by all the creative folks at the conference!

Among other things, there was a panel that included these awesome people: Jack Gerbes, Director of the Maryland Film Office; AK Adams, who gave the keynote speech about an amazing-sounding mixed-use development for filmmakers and other creative types, not only for the benefit of PG County, but for the region, the country, and internationally; and Rhonda Dallas, Executive Director of the Prince George’s Arts and Humanities Coucil/Prince George’s Film Office. There were two great presentations I attended in the afternoon. One on The Prince George’s Memory Project – an effort to archive the home movies and old photos that commemorate the lives of Prince George’s County residents. The founders of this initiative, O. F. Makarah and Matt White gave the talk. Given my interest in history, local and otherwise, needless to say I was fascinated. For instance, did you know that Kathy Lee Gifford attended Bowie High School? That’s Kathy Lee, in the upper-left of the screen, in her Bowie High School cheerleading outfit!

The second was a highly informative panel on film distribution models. They discussed so many innovative programs and distribution options that I was floored. This talk was presented by Susan Gervasi, co-director of the Utopia Film Festival, Kimberley Steinle-Super, program officer for fellowships & visual arts at the Mid-Atlantic Arts Foundation and Dewey Ortiz, Jr., writer and director of the short film Comeuppance, which I must say has the most awesome trailer.

Here are some more photos I took on campus. Talk about bringing back memories. Front of the Student Union. Side door to the Student Union. Are you afraid of the all niter? 🙂

I didn’t take one single selfie. You’ll have to take my word for it that when I said hello to Jack Gerbes, he remembered me from last year’s ScriptDC! Jack Gerbes with me at ScriptDC 2014.

And here’s some writing I found on the pavement outside the library, which I tried to film in the manner of rolling credits! With minimal success, I suppose, but hey, I’m new at this.

PS: Tom Baker: Where Is He Now? Tom Baker as the Fourth Doctor and in 2013. (BBC/Getty Images)

Thank you BBC America for this! 🙂 50 years of ‘Doctor Who’ are available to watch online (Pic: BBC)