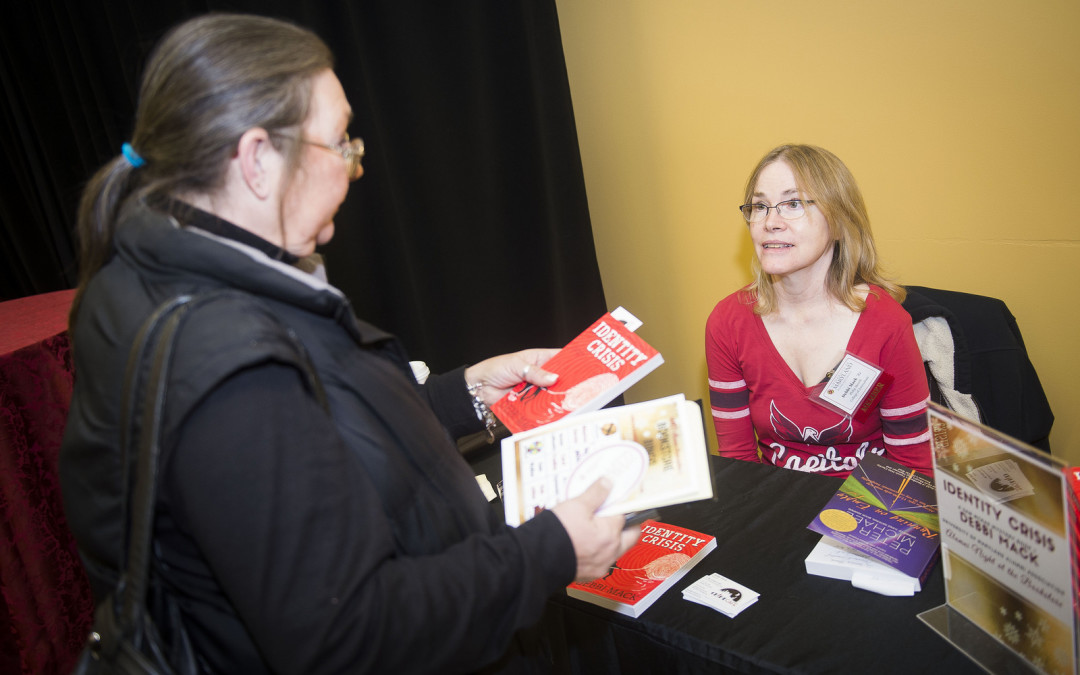 I did my latest signing in a bookstore at the University of Maryland’s student union. Here’s the Terp in the lobby! When I self-published my first novel, I made a point of doing a lot of book signings.

Last Saturday, I did my first bookstore signing in … I don’t know how long. Years, really. It was like nothing I’d ever experienced during my time as an author.

Not only that, but they set up my own table with a free-standing sign identifying me and my book. The sign and copies of my book were arranged on the table, which was draped with a black tablecloth. Please excuse any blurriness in the photos. I blame it on my bifocals, which I’m still getting used to.

In any case, all I had to do was show up with a pen and I was in business!

So, before the signing, I walked around the bookstore and here’s some of what I saw. Doctor Who and The Who! And I actually spoke to real human beings, who stopped at my table. We had the nicest conversations about my mysteries, science fiction (with one guy, whose wife liked mysteries and wanted to be a writer), screenwriting, how I’d adapted the novel on my table into a screenplay and more.

I even bought a book from another author, Peter H. Michael, called RUNNING ON EMPTY: ALONG AN EPIC 12,000-MILE ROAD TRIP AMERICA HAS ITS SAY ON ECONOMIC INEQUALITY. Sounds Steinbeckian, doesn’t it? Peter also bought my book and seemed quite interested in the beginning.

This was also true of a woman who told me, “I just read the first two pages, and I’m already hooked!” Can you say “music to my ears”?

There was also a little kid being pushed by his dad (the sci-fi guy) in a stroller. We gave each other a high-five (or low-five, really).

Book signings really are awesome. Whether in a bookstore or a coffee shop! Me, signing a book at More Than Java Cafe!

PS: I also found a great Christmas present at the bookstore! 🙂