Another Sample from My Second Hardboiled Mystery Novel 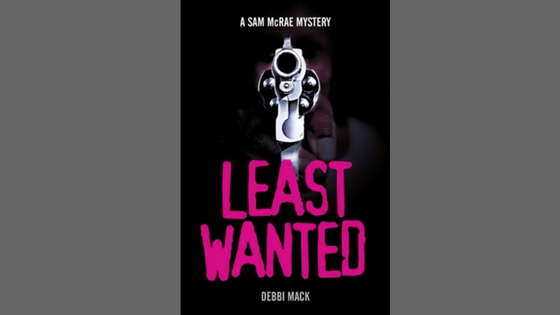 Given that only the first hardboiled mystery in the Sam McRae series is out, it seems only fair that you all should get a chance to read the second one! Both books did remarkably well (sales-wise) on both Amazon and Amazon UK. Not to mention Nook, where my first novel Identity Crisis did exceptionally well!

So, on that note, here’s Chapter Two of Least Wanted:

Assistant State’s Attorney Ellen Martinez was nothing, if not completely organized. When I stopped by her office to talk about Tina Jackson, she retrieved the girl’s file in an instant—a quick walk to a file cabinet and a glance in one drawer. She wore a white suit. I searched for a spot or stray hair and came up empty. People that neat and organized should be shot.

“Tina Jackson. Let’s see.” Martinez rocked in her high-backed chair, flipping through the file. She stopped, her eyebrow arched. “First offense. They might have let her slide at intake, if she hadn’t broken that poor woman’s arm.”

“That was an accident,” I said. “She never meant to hurt her.”

“Little Tina has a mouth on her, too, says here.”

“I think her talk is bigger than her walk.”

Martinez fixed me with a knowing look. “Really? Well, she’s no stranger to the system.”

“I thought you said this was her first offense.”

“It is. I’m talking about social services.” She flipped to another page, placed the file on the desk and tapped a pale pink fingernail on a copy of a court order. “Tina’s mother, Shanae Jackson, was ordered into rehab five years ago. She was a crack addict, selling for extra money. None of this might have come out if it hadn’t been for the abuse.”

“A doctor noticed Tina’s bruises. It took some doing, but he squeezed the story out of her. Shanae had mood swings. A tendency to fly into rages. One word could set her off. Used to take it out on Tina with an extension cord. One time, she threatened Tina with her own softball bat.” Martinez spoke matter-of-factly, like this was the kind of story she’d told many times before. “Clearly, Ms. Jackson had anger management problems, probably aggravated by the crack.”

I nodded. Obviously, there was more than the usual mother-daughter friction between Shanae and Tina. “So Tina would have been about eight at the time. Where did social services place her?”

“With the dad, Rodney Fisher. Shanae’s brother came down from New York to contest it, but his concerns were dismissed as personal animosity.”

“How long did Tina live with Fisher?”

“Close to three years. Shanae was in rehab maybe a year of that time. She filed a petition to regain custody after that. It dragged out, but her brother kept paying the legal bills so . . . .” Martinez’s mouth twisted into a look of wry distaste. “The case kept going until Shanae got what she wanted.”

I nodded and jotted this information on my notepad. It could be important, not only for Tina’s case, but Shanae’s request for child support. I wondered if I should feel embarrassed that I hadn’t thought to question my own clients on these matters.

Martinez must have read my mind. “I only know this because I’ve had the file long enough to make some inquiries.” She paused and sat up straighter. “And I’ve been handling juvenile cases long enough to know what inquiries to make.”

And you obviously haven’t, I mentally finished her statement. “Well, thank you for letting me know,” I said, trying to maintain a semblance of poise. “Could I get a copy of your paperwork for my file?”

“Certainly. Happy to help in any way I can.”

I reached for the file. “May I take a look?”

She placed it in my hands. “Knock yourself out.”

I went through the documentation. Along with what Shanae had given me, I found court filings, DSS forms, and other paperwork related to her rehab, Tina’s temporary placement with her father, and the subsequent custody proceeding. I indicated what I wanted copied, and Martinez stepped out with the file a moment to find a secretary to handle it.

“Thanks,” I said, upon her return. “So what was your point in bringing all this up?”

“Tina’s had it rough. A mostly absent father. A mother with problems of her own.” Martinez rounded her desk and sat. “She’s reached an age where she’s starting to act out. What she does now could mean the difference between staying straight and going off the rails. This first offense could be a warning.”

“So what’s the bottom line?”

“This is her first offense.” Martinez toyed with the bent corner of another file, smoothing it with her thumb. “But given the violent nature of the crime and her personal history, I don’t want her to get off with a mere slap on the wrist. I’m asking for six months detention, counseling, and restitution for the victim’s medical bills.”

I stared at her. “Detention? You’re kidding, right?”

“Look, I know I haven’t handled a lot of juvenile cases, but I’ve done criminal work. I can think of adults with priors who’ve pled for better deals than this. What about community service?”

Martinez tucked a stray wisp of dark hair behind her ear and leaned forward. “Juvenile crime is a growing problem in this county,” she droned, as if narrating a documentary. “Especially among girls. And this wasn’t a minor crime. An elderly woman was hurt. Tina and others like her need to understand there are serious consequences for that.” She settled back in her chair and resumed rocking. That simple action irritated me. “Besides,” she said. “I think this incident is more than a fluke. I think it’s a cry for help.”

“Perhaps,” I said. “But to lock her up? The punishment seems out of proportion to the crime. Would you settle for fifty hours of community service and court-ordered counseling?”

Martinez crossed her legs, giving me that look of smug assuredness that came from knowing the juvenile master would take her word as gospel and I was just another defense attorney. Scum.

“This isn’t negotiable,” she said. “If you don’t like it, you can always make your pitch to Master Cain.”

“You can bet on it,” I said. “I trust Cain isn’t going to add to the overcrowding at detention centers by locking up a kid on a first offense, just because she’s suffered a few hard knocks. Or comes from the wrong neighborhood.”

It was Martinez’s turn to frown. “This has nothing to do with Tina’s neighborhood.”

“No, of course not. Or her race either, I’m sure.” I leaned forward and Martinez stopped rocking. A minor victory. “Just tell me, when was the last time you sent a white, middle-class kid off to juvie jail for a purse-snatching and a first offense at that? Has it ever happened?”

Martinez said nothing. Her assistant came in and handed Martinez the file and the copies. Martinez gave the copies to me.

“I guess that about wraps it up,” she said.

She gave me a prim nod and we both rose and shook hands. “Nice to meet you,” she said.

Yeah, right, I thought. I felt blindsided by what Martinez had told me, but it was the kind of thing that would have come out sooner or later. Better to learn it now than the hard way later.

What I didn’t realize was how many more surprises Tina’s case had in store for me.

And don’t forget, I’m giving away the whole book for free! Just look here, here, here, or here! Or even here! 🙂

Plus, if you like, you can find the first one right here!

Only 13 more days, until the Crime Cafe Stories Project deadline comes! So, check out this video for the two awesome crime fiction ebooks we’ve put together!