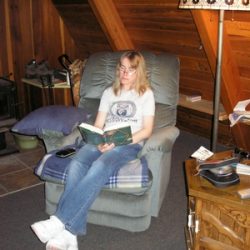 At the end of Dayton’s first WWII blackout drill, a murder victim is found with private investigator Maggie Sullivan’s name and address in his pocket. Hours earlier he sat in her office asking for help – and using a different identity.

With the war draining men from all walks of life, a homicide detective long dismissive of Maggie’s skills reaches out to form an eggshell-fragile alliance. Warily they work together to find the person behind two vastly different deaths: An ex-con killed neatly outside a factory and a young woman left in a blood-soaked apartment.

Suspects abound. Maggie’s client may have links to the killer. A bitter ex-con had plenty of reason to want the man who betrayed him dead. And a sleazy pulp crime writer may be after more than a story.

Maggie works frantically to unmask the murderer before he kills again. But she must also bury an old friend and watch the man who once swore to love her forever turn elsewhere. Alone, she pushes doggedly on through a landscape darkened by homefront precautions and human evil.

You can get it from Amazon or Kobo (where I got it). Or from Apple. Or Barnes & Noble!

At the moment, my husband’s reading First Drop by Zoe Sharp. He tells me it’s a page-turner from the get-go. And I can believe that! And here’s the back of the book description!

It should have been an easy one. After Special Forces training and a wee sojourn at a school for would-be killers, Charlie has a plush assignment: Baking her chilly British bones in the Florida sunshine minding a mogul’s kid. But then the mogul-daddy disappears, Charlie’s boyfriend/boss goes on radio silence, and suddenly she’s up there all alone, the wind whipping as she stares into the drop, a scream rising from her chest, and all of it in a country where you can’t get a decent beer.

You can buy the book from Amazon, Kobo, Apple, or Barnes & Noble.

Next up is Trigger, the third book in the Frank Marr series. And, okay, maybe I’m a wee bit biased because the stories are based in D.C. Right in my own backyard! Kinda. 🙂 And here’s the description!

In the latest novel from David Swinson, “one of the best dialogue hounds in the business” (New York Times Book Review), Frank Marr, a good cop with a bad habit, must choose between justice and loyalty to an old friend.

Frank Marr was a good cop, until his burgeoning addictions to alcohol and cocaine forced him into retirement from the D.C. Metro police. Now, he’s barely eking out a living as a private investigator for a defense attorney–also Frank’s ex-girlfriend.

Ostracized by his family after a botched case that led to the death of his baby cousin, Jeffrey, Frank was on a collision course with rock bottom. Now clean and clinging hard to sobriety, Frank passes the time–and tests himself–by robbing the houses of local dealers, taking their cash and flushing their drugs down the toilet. When an old friend from his police days needs Frank’s help to prove he didn’t shoot an unarmed civilian, Frank is drawn back into the world of dirty cops and suspicious drug busts, running in the same circles that enabled his addiction those years ago.

Never one to play by the rules, Frank recruits a young man he nearly executed years before. Together–a good man trying not to go bad and a bad man trying to do good–detective and criminal charge headfirst into the D.C. drug wars. Neither may make it out.

The book can be obtained from Amazon, Kobo, and Apple. And Barnes & Noble!

Finally, the latest Elvis Cole/Joe Pike novel in series by Robert Crais. This one is called A Dangerous Man. And, once again, the book description!

A brilliant new crime novel from the beloved, bestselling, and award-winning master of the genre–and Joe Pike’s most perilous case to date.

Joe Pike didn’t expect to rescue a woman that day. He went to the bank same as anyone goes to the bank, and returned to his Jeep. So when Isabel Roland, the lonely young teller who helped him, steps out of the bank on her way to lunch, Joe is on hand when two men abduct her. Joe chases them down, and the two men are arrested. But instead of putting the drama to bed, the arrests are only the beginning of the trouble for Joe and Izzy.

After posting bail, the two abductors are murdered and Izzy disappears. Pike calls on his friend, Elvis Cole, to help learn the truth. What Elvis uncovers is a twisted family story that involves corporate whistleblowing, huge amounts of cash, the Witness Relocation Program, and a long line of lies. But what of all that did Izzy know? Is she a perpetrator or a victim? And how far will Joe go to find out?

Like all the others, you can buy the book from Amazon, Kobo, Apple, or Barnes & Noble.

And with that, I’ll only add as a footnote that I’m re-releasing my middle grade/young adult novel, Invisible Me, in print (and ebook and audiobook) with a brand new cover!

So, this one’s for the young readers. Or young at heart, anyway. 🙂 With the new tagline: How far will you go to be accepted?

FINALIST IN THE 2016 IPNE BOOK AWARDS

As a military brat and albino, 13-year old Portia Maddox has bounced from school to school, the perennial outsider. So when Denise Laughton, the most popular girl in her class, asks for her help in exchange for an invite to Denise’s big birthday party, Portia jumps at the chance to go. But there’s a catch: Portia must spy on Randy, Denise’s boyfriend, to find out whether he’s cheating on her.

It seems like an easy task. However, Portia’s spying unearths a tangled web of duplicity, hidden agendas and family secrets. And when Portia’s budding friendship with social outcast Judy and her feelings for Randy conflict with her plans to befriend Denise, Portia must make hard choices for the good of all.

Available at Amazon, Kobo, Apple, and (of course) Barnes & Noble! Photo by Katya Austin on Unsplash