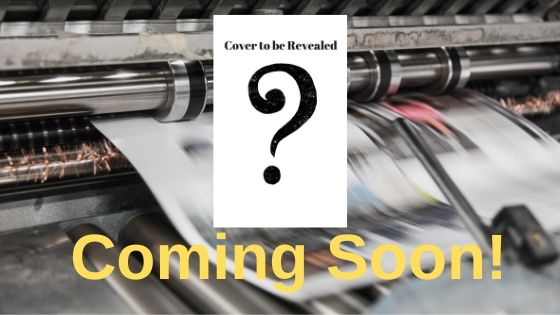 This is to announce that my new release is available for pre-order right this moment! The book is scheduled to come out in late May 2020! 🙂

I still don’t have the actual cover yet, but I promise you I’m working on that.

In the meantime, please enjoy this excerpt from Damaged Goods, the first in a planned series of mystery novellas about a female Marine named Erica Jensen! This is a pretend cover! 🙂

Ten minutes. It was only supposed to take ten minutes to reach our ride home.

Perkins drove. I rode in the vehicle commander’s seat. An electric jolt ran up my back as our allegedly mine-resistant vehicle bounced down the dusty road. If you could dignify the narrow strip of packed sand as such. The same relentless beige as its surroundings.

Corporal Perkins spat out an oath behind a keffiyeh tied across his nose and mouth. My face was also half-encased with cloth. The idea was to keep sand from blasting down your throat. But the grit could work its way behind our makeshift filters. My face itched with the stuff. Under the desert sun, I squinted behind dark eyepro strapped tight to my head. The goggles reduced the glare and kept moon dust from blinding me.

Perkins’ oath was swallowed by the roar of the vehicle and the howling wind.

“Copy that,” I shouted, though he could no likelier hear me than I had him. I scanned the surroundings, gripping my M16-A4 rifle.

Perkins, a red-haired, freckle-faced 20-year-old, said something else. I motioned for a restatement, pointing to my ears and shaking my head. The muffled response was, “Erica, are … okay?”

Perkins was one of the good guys. He saw and acknowledged that women were a military asset. Women have aided combat troops for years—unofficially, of course—as far back as the American Revolution. Back in ’04 or ’05, the Marines led the way for women to become more officially involved. When I deployed, they assigned me to the Female Engagement Teams or FETs. This was a highly select group of women who performed valuable back-up to the ground troops and intel gathering duties. The type men couldn’t perform due to cultural niceties.

“Erica?” Perkins’ voice. The name sliced a knife-edge of worry through my mind.

He’d been asking after my health. I’d sustained a concussion while riding at the tail end of a convoy. My concentration still suffered, even after spending weeks in a hospital. I tried to conjure a response, but the wind seemed to blow thoughts straight out of my head. “I’m fine,” I yelled.

I checked my watch. Seven minutes to go.

Perkins was hell-bent on returning to his hometown in Nebraska or Kansas or some other big-ass state full of fields, small towns, and DQs. I think his family raised hogs. Me, I could think of no other place to go except the Maryland suburbs of Washington, D.C., where I’d lived all 20 years of my life. With the exception of the last two, which I’d spent in Afghanistan.

Perkins had an advantage on me, in that he had a family he wished to go home to. My parents had thought me insane to join the Marines. Maybe they were right. But their alternative was to go to college and marry well. Not my idea of a life plan.

I’d miss the people here. My comrades in arms and the ones we’d served. Even men who’d greeted the FET as skeptics had eventually been won over by our ability to connect with the locals, gather intel, and watch the men’s backs. Despite everything, I actually felt like we were a force for good. When we weren’t being blown to bits.

I wouldn’t miss the Vietnam War-era equipment the Army had abused and foisted on us, the whipping, grit-filled wind, the inedible food, scorching summer temps, freezing nights, or playing target for madmen.

The barren desert wasteland stretched for miles around us. I searched for signs of movement. My watch now indicated five minutes until we reached our ticket out of here.

Then, clear as a bell, as if Perkins’ voice were a stiletto blade piercing the noise, I heard him say, “First thing I do when I get home is have a cheeseburger. And a bottle of beer.”

I opened my mouth to reply. Then I heard the blast. Day turned to night. Is this death? I thought, before slipping into the void.

What others have said about the book:

If you’re interested, you can pre-order the book now at the special bargain price of $0.99. This price is good only during the pre-order period.

You can find the book on Amazon, Barnes & Noble, Apple, Kobo, and Smashwords. Stay tuned for more!