My Book Review of ‘At the Stroke of Midnight’ 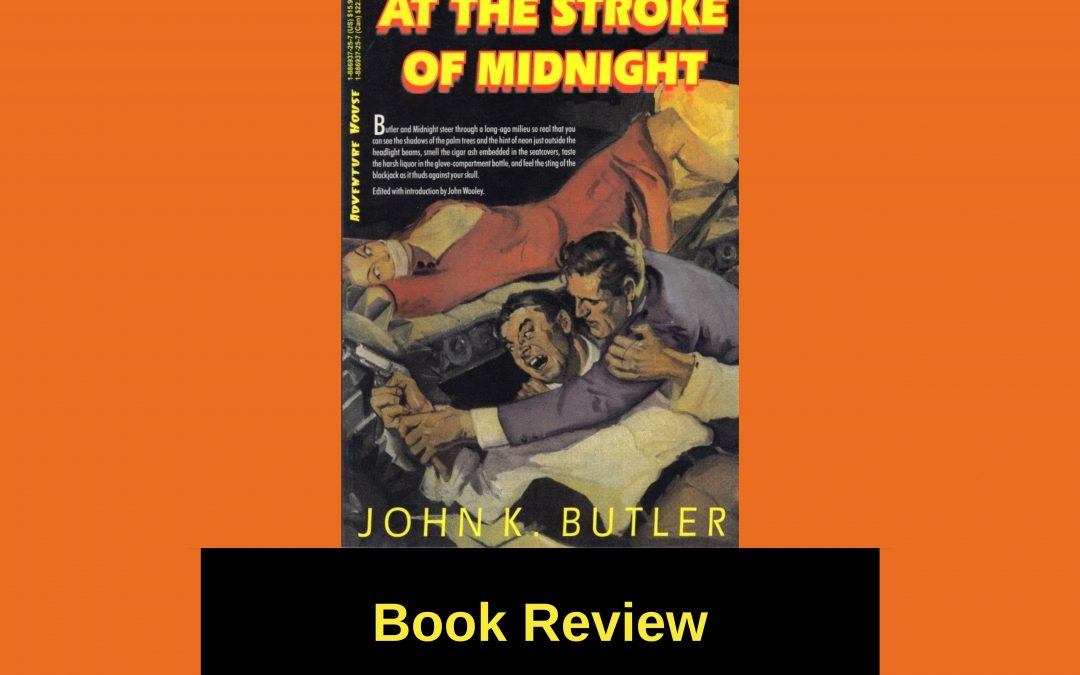 Hi! Today, I’m reviewing At the Stroke of Midnight by John K. Butler. It’s a collection of his pulp fiction from Dime Detective.

See that there? Dime Detective. Isn’t that cool? Anyway, there’s a lot that’s cool about this book. I mean, I just love this kind of writing. The stories are just nonstop, action-packed stuff with, of course, an outwardly crusty, but inwardly, nice detective—male detective, of course. What I wouldn’t give to see more female detectives like this. Anyway. having said that, I just loved this book, loved this book so much that I was actually able to read it all of it before I had to return it to the library, which really amazed me, but how can you not like a book that has this kind of thing in it? Isn’t that cool? Look at that there.

I love that. And, of course I just love that these books have advertising. Pepsi! Product placement or something. Yeah, really cool. Cause, you know, it harkens back to the old pulp magazine days. Of course they would have advertising in magazines, but it reminds me of … actually when I was a kid, I don’t remember how old. Eleven, maybe. I happened to read an old Perry Mason novel. And I noticed that there was a little ad stuck in there. Kind of like, you know, it was actually, it was part of the book itself on one of the pages, an ad for cigarettes. And I thought “I’m reading a book with an ad for cigarettes in it. I’m not sure I’m supposed to be reading this.” And I was like, well, okay. Very, very interesting. Anyway, it reminded me of that <laugh> and, this is just really cool.

This is just such cool writing. And just like I said, nonstop action and highly improbable plots, but who cares? <laugh> Who cares? And so many complications that I defy anyone to truly follow sometimes what’s going on here. But it’s awesome reading and I love it. So there you go. And that’s my review for today. Thanks.

Did I say he was a private detective? Yes, I did. And that is wrong. He is a taxi driver for the Red Owl Cab Company in this part of Los Angeles. So anyway, yeah, so even though he acts like a private eye and has every quality that Raymond Chandler would give to Philip Marlowe or anyone else in that position, he is a cab driver who manages to pick up the wrong fare all the time. And of course he has the nickname, Steve Midnight.

I don’t remember what his full name, actual name was. They call him Steve Midnight, because when the clock strikes twelve, shit happens for Steve <laugh>. So when the cuckoo strikes twelve or the gong rings twelve or the clock bongs twelve—they used the expression different ways at different times. And I thought it was all hilarious, cause it’s like, “Oh, you’re that famous cab driver, Steve Midnight, the one who, whose life goes to hell when the clock strikes twelve, etc.” Anyway, it was pretty funny and yeah, I got that part wrong. He’s not a private eye. He’s a cab driver, Red Owl Cab Company with some guy named Regan in charge who’s a real bastard. Anyway, that’s it. That’s really it. And I’ll talk to you later.

PS: But he’s known as Steve Midnight because when trouble, when Steve Midnight <laugh> no, no, when … I’m getting it all wrong. When the clock strikes twelve, okay, I’m gonna stop there.