Book Review: Mystery by the Chesapeake 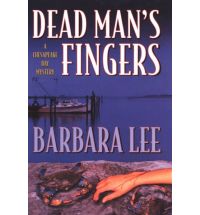 I recently finished another mystery that’s strong on locale and character. In Dead Man’s Fingers, Eve Elliott, a former New York City ad woman who made a post-divorce move to Maryland, is trying to settle into her new life as a real estate agent with her aunt’s firm in a small town on the Magothy River.

The aunt has a minor problem with her neighbor’s plans to build another house on their waterfront property, which suddenly turns into a big problem when a local activist, Lauren DeWitt, discovers the neighbor is barred by law from building the second house. After being wrongly linked with the activist, Eve and her aunt end up becoming pariahs of the neighborhood, even though they did nothing to thwart the neighbor’s plans.

Eve also finds evidence of possible underground storage tanks on some land that a client–an influential man running for public office — is trying to sell. When Eve’s aunt reports this to the state Department of the Environment, it does nothing to endear them to the client or area landowners.

Meanwhile, the activist, DeWitt, draws the wrath of many people more concerned with keeping their waterfront lots usable and marketable than with environmental protection. So, when she’s murdered, there are plenty of potential suspects. Eve’s interest in the case intensifies when her aunt seems to become a target, too.

Author Barbara Lee creates a large and interesting assortment of characters for Eve to bump up against as she goes about solving the mystery. She creates wonderful tension between Eve and the detective on the case, the various suspects, and her various romantic interests, in nice contrast to the warm, comfortable relationship she has with her aunt. Lee also does a great job with describing the setting and the unique characteristics of the region and its people — the heat of a Maryland summer, the thrum of the cicadas, the process of crab fishing off a pier.

Eve is a sharp, funny and likeable heroine and I particularly enjoyed her musings on the contrast between her new life in a small southern town and her old one in the Big Apple. (As a native New Yorker myself, I share her bewildered lack of enthusiasm for the whole crab eating ritual that folks in these parts seem to cherish.) Lee also manages to construct an engaging story involving some fairly dry topics — zoning and environmental law — by concentrating on the passions that they stir in people.

This is the third and last book in Lee’s Chesapeake Bay Mystery series and, as far as I know, she has no plans to write more. And that is a shame.

It was Barbara Lee who told me about Sisters in Crime. She was also a founding member of the Chesapeake Chapter of SinC. We used to take walks together around a lake in Columbia. I remember being impressed that she would take on a subject like this for a mystery.

On that note, here’s a bonus link of the ponies at Assateague, doing their thing.