Book Review: ‘Dead at the Take-Off’ by Lester Dent 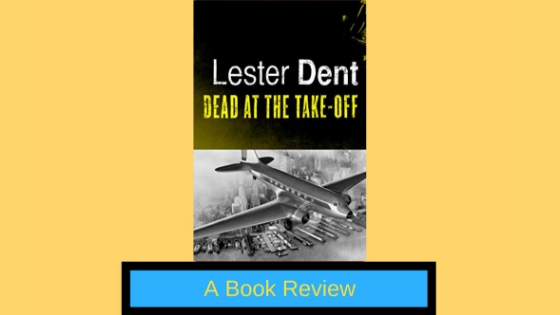 Hi all! Today I have another book review that should be of interest to crime fiction lovers.

I’m posting my video, along with a transcript that I managed to pull together.

Hi. I’m going to review Dead at the Take-Off  by Lester Dent. Now, I got into Lester Dent really kind of accidentally. I happened upon this book called The Lost Radio Shows of Lester Dent or something like that. It involved the Man of Bronze, this really superhero kind of guy who’s like an Indiana Jones and Sherlock Holmes combined.

Anyway, somebody on Twitter suggested Dead at the Take-Off. So I actually borrowed this—the cover isn’t much, but you can see I got it from the Bangor Maine Library, and I’m just so thrilled that I did. I’m so thrilled that it was available through inter-library loan, because the writing is just superb. It’s so good that anybody who tells you that crime fiction is junk or that it’s not literary should read this book.

It’s Lester Dent’s Dead at the Take-Off. And the plot is complex,the characters fascinating, and everybody comes together at the end as they’re all sort of connected and they all come together at the end in this big climax. It’s really something, so I highly recommend Dead at the Take-Off. If you can, find it, get it on inter-library loan, or get it however you can because it’s really good. And I’ll just say thanks and talk to you later!

I gave this five stars on GoodReads! 🙂

PS: I’ll post something about the C3 conference as soon as I can! 🙂