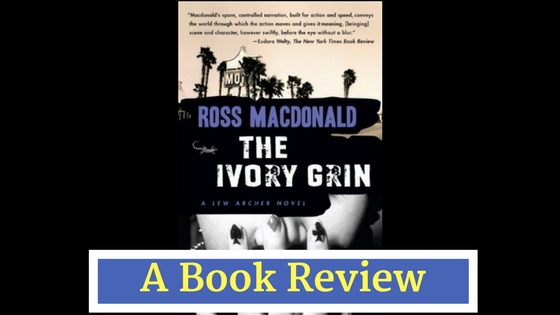 My recommend reading for anyone who enjoys books that inspire hardboiled mystery authors (like myself) is just about anything written by Ross Macdonald.

This is a review of The Ivory Grin, which I ran on my former book review blog, The Book Grrl.

It was originally posted on August 25, 2008, but the passage of time has done nothing to change my opinion about it. So, here’s the review! 🙂 Ross Macdonald was nothing if not a gifted stylist when it came to writing prose. THE IVORY GRIN starts off with a tension-filled meeting between the protagonist, private eye Lew Archer, and an unpleasant (in attitude and looks), but well-dressed, woman who wants to hire him.

You know the kind of person Archer’s dealing with when he says that she “looked up at me with the air of an early bird surveying an outsize worm,” then goes on to state that after giving him a handshake “as hard as a man’s . . . she placed [her hand] behind my elbow, ushered me into my own office, and closed the door behind her.” She then “seated herself in an armchair by the door and looked around the waiting-room. It was neither large nor expensively furnished, and she seemed to be registering those circumstances.”

Right away, with a few short lines and a modicum of humor, we know quite a bit about this woman. And Archer. And we know any business between them won’t go easily.

The woman wants Archer to find her former maid, who she says has stolen jewelry from her. The woman gives a name (Una–no last name, just Una), but won’t give her address. Archer doesn’t like Una or believe her story (right down to her name). However, (to paraphrase The Maltese Falcon) he does believe the hundred dollar bill she tosses his way to do the job. Archer sticks the bill in his wallet, “where it looked rather lonely.” Despite his low cash flow, he almost returns it to Una as he gets to know and dislike her further.

He does, of course, take the case. But what Archer is hired to do and what he actually ends up doing are quite different.

The story mainly takes place in two small Southern California towns and involves such a tangle of characters and plot lines, I sometimes felt like I needed a score card (better yet, a flowchart) to follow what was going on.

But that’s okay, because Macdonald was such a superb writer. He could deliver a wicked (often funny) turn of phrase that summed up character, situation, mood and/or viewpoint in a few well-chosen words. He had a flair for great dialogue, as well as for writing about dark issues from people’s pasts, and a way with metaphors that rivaled Raymond Chandler.

Besides, at one point in the story, Archer describes his client being “in a spiteful rage, less than half a woman now, a mean little mannish doll raving ventriloquially.”

Now “ventriloquially” is a real word (I looked it up in Webster’s online dictionary), but how many writers would have the gumption to actually use it?

Addendum: I’d like to thank the people at Vintage Crime/Black Lizard for reissuing this and several of Macdonald’s other Lew Archer novels, which had previously been out of print. They are classics and it’s great to see them back in circulation.

You can buy this book from Amazon here. It’s also on Barnes & Noble. They’ve got a 15% off thing going on there this weekend.