Check out Sam McRae in an Audiobook! 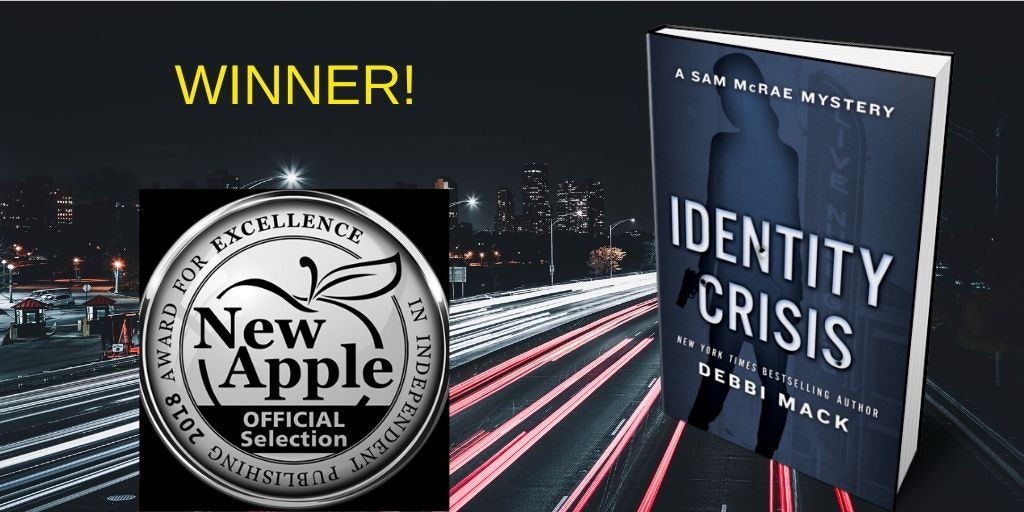 Since it’s quite likely you may not be aware of this, I wanted to let you know that my first novel, Identity Crisis, is actually available as an audiobook! The cover may be different, but the content is the same.

And here’s more of Identity Crisis!

I lay back on the bed with a groan, stared at the pebbled plaster ceiling of our motel room, and prayed for the day to end quickly.

Melanie sat cross-legged on the other bed, watching some show about young female lawyers in microminis and “fuck me” Manolo Blahniks, who couldn’t understand why the senior partners at their firm weren’t taking them seriously.

Sending the car off behind a tow truck left us little choice but to walk to a nearby motel. The price was right, and a woman at the front desk with a broad smile and a mole of unique proportions on her nose assured us the ice machine was probably working.

All I really cared about was that the bed was comfortable, the room was clean, and my car would be ready the next day.

Melanie yawned and stretched. She got up and walked to the dresser, where she’d put her leftover sandwich.

I wondered if the dresser had held anyone’s clothes since its arrival at the motel.

“Now, I’m hungry,” she said, returning to the bed with the box and plopping down. Those were the first words she’d spoken since we checked in.

“I think there’s a McDonald’s down the road, if you want more.”

She thought about it. “Maybe. I almost feel too tired to bother, you know?”

On screen, one of the high-fashion lawyers was going to court with a thin file tucked under one arm and a determined pout on her collagen-enhanced lips.

I wondered if Melanie liked baseball. I didn’t know if there was a game on. Would they watch the Orioles here or the Pittsburgh Pirates?

I looked at Melanie. She kept her eyes on the tube.

“I don’t know anything about identity theft or where those papers came from.” She paused. “But Tom might have.”

I rolled onto my side and perched my head on one hand. “Tom?”

“He was a computer expert, you know?”

“He had his own business. Computer consulting and web hosting. In fact, he did some work for the bank. That’s how we met.”

“I’ve read a little about those cases,” I said. “There’ve been some big ones, where employees get personal data from their employers’ databases and steal hundreds of thousands of dollars. A bank would be a great place to get that kind of data.”

Melanie grimaced. “If he was making big money from identity theft, he never told me. He was always trying to borrow from me.”

It seemed inconsistent, but there could have been an explanation. “Maybe he kept the money hidden, the way regular thieves will hide a stash until the heat’s off, as they say in the movies.”

“You’d still think he could have risked using a couple of hundred, now and then.”

Melanie chewed her sandwich. In silence, we watched a commercial featuring a grinning woman who wore Depends and whose days were apparently spent in a nonstop series of tennis games and deck parties.

“Donna never mentioned that, about Tom working for the bank,” I said. “Not that she’d have a reason. By the way, she’s very concerned about you.”
Melanie sighed. “Really? She got mad at me for a while about Tom. She thought it was dumb for me to start a relationship with a guy I hardly knew. Obviously, she was right. I had no idea about his problems. There’s so much I still don’t know about him.”

What do we know about anyone? What did I know about Melanie? She was a client. Usually, I trust my instincts about people, and she had seemed OK when I first met her. Now a series of strange circumstances was challenging my first impression. Were the circumstances evidence of the truth or a muddling of the truth?

“You know, I think I will walk over to that McDonald’s,” I said. “I can bring back something if you like.”

“OK. Maybe one of those salads? With ranch dressing?” She retrieved her purse. “This should cover it. Hey, incidentally …”

“I never properly thanked you. I wasn’t sure I should go back at first, but I think you’re right. I can’t run from this.” She looked directly at me. “And I am innocent.”

I nodded, still not sure.

On the way to McDonald’s, I called directory assistance for Donna’s home number and rang her up. I wondered how much the long-distance would cost me. I couldn’t even remember if it was included in my plan.

Donna sounded distracted, but relieved. “Where was she?”

“On her way out of town,” I said, keeping it vague. Maybe I was paranoid, but somehow it seemed safer for everyone if I kept our location a secret. “We’re heading back.”

“Not far. I’ll tell you later. You wouldn’t believe what’s been going on. The important thing is, Melanie’s fine.”

“While I’m at it, I want to check something out with you,” I said. “Melanie says Tom did some work for the bank.”

“Working on the computers?”

“How long ago was that?”

“Have you had any security breaches since then?”

“No, nothing in particular. I’d better go. I’ll be in touch sometime after we get back.”

“Sam, there’s something—” She stopped.

I shrugged and disconnected.

At McDonald’s, I got a salad for Melanie, a Filet-O-Fish for myself. There was little traffic as I walked back to the motel. The sun had already set in a rosy glow. The twilight was warm and pleasant, a little less humid than at home. Off in the woods, away from the road, I saw swarms of fireflies, emitting brief flashes of phosphorescent light in upward strokes. A lone bird peeped at intervals.

I thought about Melanie’s explanation. She could have been right about Tom. I had an account at First Bank of Laurel. If that box of files was any indication, I was one victim among many.
The motel lot had few cars. From what I could see, only two other rooms had guests. I wondered how the place stayed in business.

One car seemed familiar, but I couldn’t think where I’d seen it. It was nondescript, a light color. Like about a million other cars. But this one … what was it? I knew I’d seen it before, but couldn’t remember where.

Melanie met me at the door, and we divvied up the food. As we ate, the image of the car continued to nag at me. Then I realized … it could have been the car that cut off the Lincoln back in Breezewood.

“OK. Anything without caffeine.”

I went outside and took a stroll by the car, keeping a distance, trying not to be obvious. It was tan, like the one in Breezewood. It was also an older model—maybe twenty years, maybe older. One of those boxy jobs with a lot of power. I still wasn’t sure it was the same car, but the resemblance was close.

I shook my head. You’re paranoid. That’s what I thought when I saw the Lincoln. Of course, if it was the same car, the driver had done us a favor. What do you call it when you think you’re being stalked by friends, rather than enemies?

I found the soda machine and got a couple of ginger ales. On the way back, I slowed to look at the car again. A Ford Fairlane. Lots of power, no style.

I guess I was tired. I didn’t hear him approach. He was only a few feet away when he said, “Not as old as yours, but a classic in its own way.”

I whirled around. He stood there, looking at me with that same shit-eating grin he’d had in my office.

“John Drake, I presume,” I said, trying to ignore the way my heart was pounding in my chest.

His smile broadened. “I guess you saw through that one.” He wore a light sports jacket and a pair of slacks. Why so dressed up, here in the middle of Nowheresville P-A on a warm summer night?

“Who the hell are you and what are you doing here?”

“I suppose so,” I said. “I take it I have you to thank for getting out of Breezewood without the Mob on my tail.”

“Stavos would probably have caught up with you. Your car isn’t in the best shape.”

“I’m afraid it’s the only one I have. But let’s get back to you. See, I know who Stavos is and why he’s following me. You, on the other hand, I haven’t a clue about.”

“Sam?” Melanie had come outside. She walked up to us. “What’s going on?”

“Are you Melanie Hayes?” the stranger said.

He reached inside his jacket.

Melanie’s eyes widened. She started to turn. Meanwhile, the man had already seized her shoulder with his free hand. I tried to grab his other arm, but he pulled it away. His hand emerged from beneath the jacket—holding an envelope.

“My name is Reed Duvall, Ms. Hayes. I’m a private investigator.” He handed her the envelope. “And you’ve just been served.”

You can download the audiobook version of this story from Apple, Amazon, Audible, or Audible UK.

You can also read more chapters of the book right here.